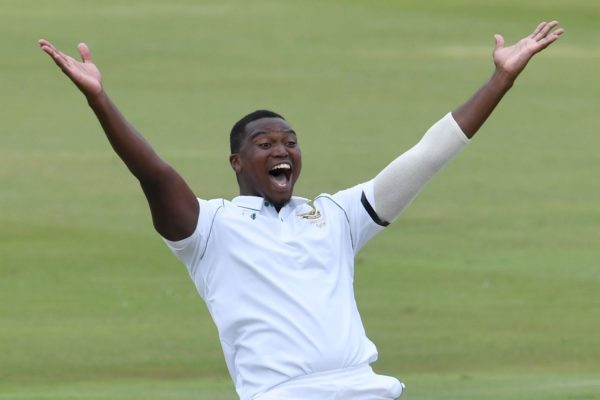 Proteas fast bowler Lungi Ngidi makes an appeal for a wicket on day one of the opening Test against India. Picture: Gallo Images

Lungi Ngidi returned to international action for the first time since July on Sunday, and though he struggled initially, he still ended up taking all three wickets to fall on an opening day of toil for the Proteas against India in Centurion.

India, led by Lokesh Rahul’s determined 122 not out, scored 272/3 on the opening day of the series. But from South Africa’s perspective, Ngidi’s return of 3/45 in 17 overs was a big positive considering the worries over his fitness leading into the series.

While the 25-year-old was adamant that he was physically fine, he admitted to initially struggling with his rhythm, before a change of ends helped him considerably. Ngidi took the new ball from the Hennops River End and looked rusty, as did most of the bowlers as openers Rahul and Mayank Agarwal (60) put on 117 for the first wicket.

Ngidi then removed both Agarwal and Cheteshwar Pujara (0) with successive deliveries midway through the second session, both falling to deliveries that snaked back into them.

“Physically I’m good. It’s not as if I’ve been sitting around vegetating. There’s been lots of training and game simulations,” Ngidi said on Sunday.

“But I got more rhythm, I was more comfortable and my action felt better from the West Lane End.

“I asked at lunch if I could switch ends because at first I struggled to find my right length and areas. I just felt more comfortable from the other end.

“They were wobble-seam balls – you can’t be sure which way they will seam – but more often than not they come into the batsman. I was trying to create a bit of doubt, attack the stumps and pads more.

“They were leaving well and we expected more swing, so when the pitch is not doing as much as you expected, then you have to change plans.”

Ngidi also picked up the huge scalp of Virat Kohli, having him caught at first slip for 35, just when he was starting to show all his class.

Again, the Proteas and their fans can raise a glass to Ngidi’s willingness to try something different. Kohli and Rahul were in command, having added 82 for the third wicket, when Ngidi surprised the Indian captain with a full and wide away-swinger.

“That ball gives you a chance. Sometimes you have to take a gamble. In 2018 at the Wanderers I got him out with a similar delivery,” Ngidi said.

“He’s really good off his legs and through the covers, but I gave him something he maybe didn’t expect. It would have looked like a free ball to hit, but there was a bit of nibble.

“It was a roll of the dice and it went my way.”