Mulder scored a determined 33, a welcome return to form for the talented 24-year-old who was heavily criticised for his performance in the first Test. 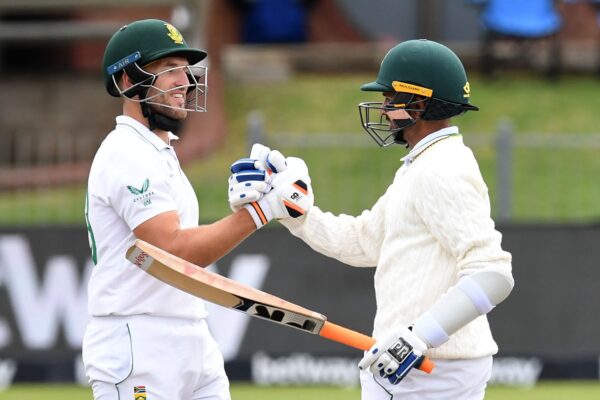 Senior Proteas spinner Keshav Maharaj has backed Wiaan Mulder as the all-rounder South Africa need after the pair dovetailed superbly to dominate the second day of the second Test against Bangladesh at St George’s Park.

Mulder and Maharaj shared an 81-run seventh-wicket partnership that laid the groundwork for the Proteas posting a formidable 453 in their first innings on Saturday, and Mulder was then the star bowler with 3/15 in six overs as Bangladesh were reduced to 139/5 by stumps.

While Maharaj lashed a punishing 84 off just 95 balls, Mulder scored a determined 33. It was a welcome return to form for the talented 24-year-old, who was heavily criticised for his performance in the first Test.

ALSO READ: Mulder, Maharaj shine with bat and ball to put Proteas in charge in Gqeberha

“Wiaan has taken a lot of flak recently, but that innings he played in the second innings of the Test we won in New Zealand showed his capability,” Maharaj pointed out.

“He might not be scoring fifties but he is sharing very good partnerships, like he showed again today. He really knuckled down and he was unfortunate to get out to a really good ball.

“Wiaan played extremely well with Kyle Verreynne first thing in the morning and that allowed me to play with freedom.

“And then he showed his value with the swinging ball. I think today will be a huge confidence boost for him and he adds variety to our attack and batting depth.”

Having made his career-best score and his fourth Test half-century, Maharaj said the lower-order needed to score runs consistently in order for the team to be able to field five bowlers.

“We have good depth to our batting, it’s just about us putting our hands up on a consistent basis and giving the coaches and selectors the confidence to play a more balanced attack.”

The KZN Dolphins star admitted that he had wasted a great opportunity for his maiden Test century, being bowled by fellow left-arm spinner Taijul Islam when he stepped down the wicket and tried to heave the ball over the leg-side. Maharaj said he should have aimed for long-on rather than cow-corner.

“When you get so close, it always crosses your mind about getting the hundred,” the maker of two first-class centuries said.

“It was a golden opportunity for me, but the adrenalin is going. I probably should have gone straight like I had been doing before.”