Proteas Women will be after quicker batting in key second ODI

"We’re going to show a lot more aggression with the bat, take the bowlers on a bit more." 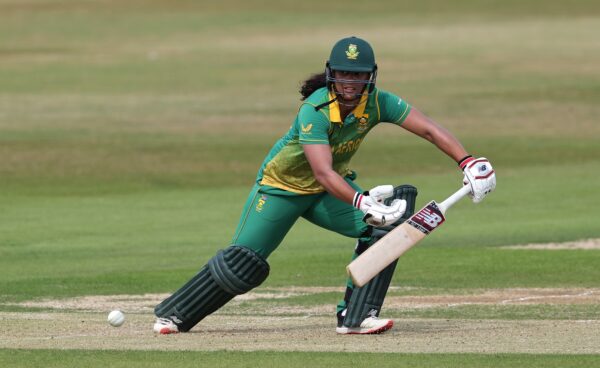 Chloe Tryon shows the positive approach South Africa wants as she collects one of her 10 boundaries against England in the first ODI. Picture: David Rogers/Getty Images

The Proteas Women’s team will be after quicker batting in order to stay alive in the three-match series when they tackle England again in the second ODI in Bristol on Friday.

Having won the toss and elected to bat first in the opening match in Northampton earlier this week, South Africa struggled up front in the face of some outstanding quick bowling by the veteran Katherine Brunt (9-1-18-3). After 30 overs the Proteas had posted just 109/5 and it was only thanks to Chloe Tryon (88 off 73) and Nadine de Klerk (38 off 53) that they managed to eventually reach 218.

No-one in the top-five batted with a strike-rate higher than 67, compared to England’s blazing batting which saw them chase down the target inside 33 overs. Emma Lamb scored a 91-ball century and Nat Sciver blasted 55 off 36 balls to show South Africa a more appropriate approach.

“It was definitely not our best performance, far off it,” De Klerk admitted on Thursday. “We all know we can play much better than that and we need to play positive cricket.

“We lacked intensity and we need to back ourselves. I definitely think we’ll put up a better game in the second ODI, we’re going to show a lot more aggression with the bat, take the bowlers on a bit more.

“We’ve been training the way we want to play and it’s gone very well. We’ve been trying out different options. We also didn’t have the best day with the ball, but England came out at a blistering pace.

“We need to think out the box more, but all credit to England for batting really well,” the 22-year-old De Klerk said.

The all-rounder has been one of the fringe players in the Proteas squad since making her debut in May 2017, but with the absence of Dane van Niekerk and others, De Klerk has been a regular starter since the start of last year.

Waiting for our chance

“It’s all about waiting for our opportunity and whenever you get the chance, you must make the best of it,” she said. “We get a lot of support from everyone and it’s just about working hard behind the scenes.

“I think everybody – including Shabnim Ismail – is good to go for the match and I think it’s going to be a really good pitch and a quick outfield.

“So we want to have a lot of fun, back ourselves and keep it simple. We’ll be going out to play nice, aggressive, positive cricket,” De Klerk said.