'We knew we had to play smart cricket, hit the pockets in the field and run hard, make sure we got runs off good balls.' 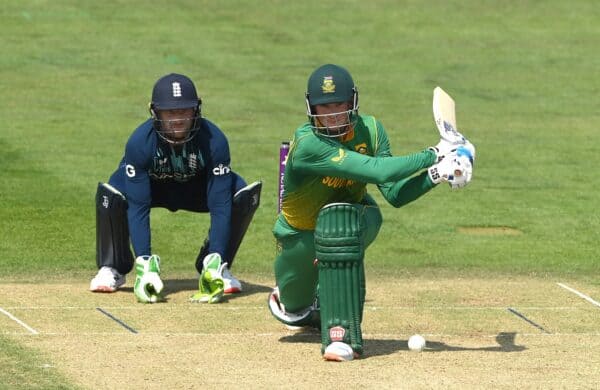 Rassie van der Dussen using the reverse-sweep to good effect as he did many times in his century at Chester-le-Street. Picture: Stu Forster/Getty Images

Rassie van der Dussen is known for being a phlegmatic, composed guy, but his mental strength shone as brightly as it ever has in the first ODI against England as not even heatwave conditions that saw other players and spectators require medical treatment could dissuade him as he cruised to a brilliant century that set up victory for the Proteas.

The stadium management in Chester-le-Street issued health warnings to their spectators as temperatures reached 36°C, but Van der Dussen kept his cool, taming the weather and the England attack as he used his three hours at the crease to compile a remarkable 134 off 117 balls.

His best score in Proteas colours led South Africa to their highest ever ODI total in England – 333/5 – and then when the bowlers produced a marvellous all-round display – both the pacemen and the spinners met expectations – victory was completed by 62 runs.

“It was pretty hot out there but not too bad, mid-30s. We’ve just had a tour of India where it was a lot worse,” Van der Dussen said with characteristic understatement after he had met the challenge.

“I just tried to read the situation and adapt. I feel like I have the game and the shot options to put the bowlers under pressure. It was a massive outfield and the wind was quite strong, so it took the six option out for 25 overs.

“We knew we had to play smart cricket, hit the pockets in the field and run hard, make sure we got runs off good balls. The pitch got tough towards the end with the old ball keeping a bit low.

“It was like playing in Bloemfontein in terms of field size and temperature. There was not a lot of bounce and you had to play straight and try and accumulate runs,” Van der Dussen said.

England’s bowlers and fielders looked like they needed medical care as Van der Dussen and Aiden Markram (77 off 61) cut loose in a third-wicket stand of 151 off just 123 balls.

Apart from their meeting against South Africa in the T20 World Cup last November, when the Proteas won by 10 runs but still missed out on the semifinals, the last time England played with much at stake against the Proteas was in 2019/20 when they visited Africa and won the Test series 3-1 and the T20s 3-0 before bailing out of the ODIs due to supposed Covid fears.

South Africa have done much to rehabilitate their image since then and Van der Dussen recognised the importance of the Proteas laying down a marker, while stressing that it was merely the first day of a long tour.

“Obviously it’s a massive result, but it’s only one match on a long tour. We had to prep well, the batting was really good and the bowlers executed brilliantly, and now we will see where we can improve.

“England are still a world-class team, with various matchwinners on their day. But you could see they’ve played a lot of cricket lately, we were a bit more up for it today,” Van der Dussen said.

Also read: England ODIs is a chance for Proteas to do something special — captain Maharaj