McIlroy teed off late and joined the leaders with a rare eagle at the tough par-five 16th. 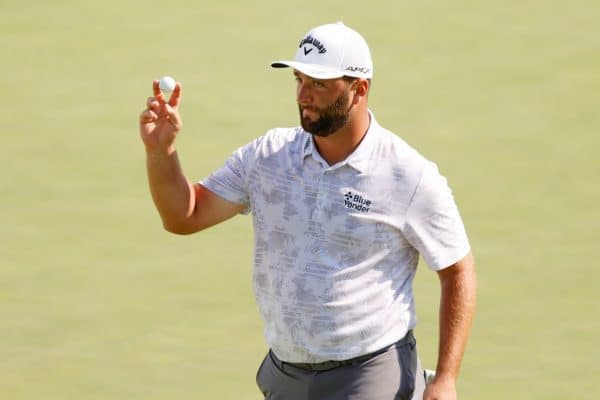 Rory McIlroy’s late eagle lifted him into a tie for the BMW Championship first-round lead on Thursday alongside world number one Jon Rahm and American Sam Burns.

Rahm, the defending champion in the second of three events in the US PGA Tour’s FedEx Cup playoffs, had eight birdies in his eight-under par 64 at Caves Valley Golf Club in suburban Baltimore, Maryland.

Burns also went bogey-free on the rain-softened layout, his eight birdies including four in a row from the 11th through the 14th.

McIlroy teed off late and joined the leaders with a rare eagle at the tough par-five 16th, where his 285-yard second shot from the fairway left him an 11-footer.

“It’s as good as I can hit a three-wood,” he said of his approach.

The eagle was especially gratifying, he said, since he has played par-fives “very poorly” in recent weeks.

“Even the front nine today, not making birdie on either of the par-fives on the front side, I was sort of thinking, here we go again.

“It was nice to play the par-fives better on the back.”

The Northern Ireland star, a four-time major-winner currently ranked 16th in the world, added seven birdies and one bogey.

He hit 13 of 14 fairways in regulation as he matched his lowest round of the season — a 64 in the final round of the Phoenix Open back in February.

His four birdies on the front nine included a 30-foot putt at the seventh hole — an energizer for a player who admitted this week he was feeling the effects of a busy schedule that included the British Open and Tokyo Olympics in July and the weather-disrupted Northern Trust that ended on Monday.

“A lot of positive signs out there,” said McIlroy, who arrived at Cave Valley ranked 28th in the playoff points standings.

Only the top 30 in the standings advance to the playoffs-ending Tour Championship.

Rahm, who won this title at Olympia Fields near Chicago last year, can head into the Tour Championship atop the standings with his first successful US PGA Tour title defense.

The Spaniard bounced back seamlessly from a disappointing finish at the Northern Trust, where he led much of the way and settled for third after a hurricane postponed the final round to Monday.

That was only the latest oddity in Rahm’s season, one in which he captured his first major title at the US Open but also had to withdraw from Memorial with a six-shot lead because of a positive Covid-19 test.

He also missed the Olympics after another positive Covid test.

“Be a goldfish,” he quipped of the secret to his resiliency, quoting sitcom hero Ted Lasso. “(A goldfish) has a 10-second memory.

“I played great golf last week, just a couple bad swings down the stretch, and that’s the most important thing to remember.”

The 26-year-old Spaniard said his enforced time off is actually benefitting him now, especially in the steamy weather in Baltimore.

“Those guys that went to the Olympics and played Memphis and played more events than me may be a little bit more tired, but really that shouldn’t be an excuse in my case,” he said.

Spain’s Sergio Garcia had seven birdies without a bogey to trail the leading trio by one stroke on seven-under 65.

Mexico’s Abraham Ancer and American Patrick Cantlay shared fifth on six-under 66, Cantlay climbing the leaderboard with a run of five straight birdies from the 12th through the 16th holes.

It was a further stroke back to a dozen players on 67, a group that included Olympic gold medalist Xander Schauffele, world number two Dustin Johnson and Masters champion Hideki Matsuyama.