Van Tonder played some tremendous shots in the final round at Sun City. 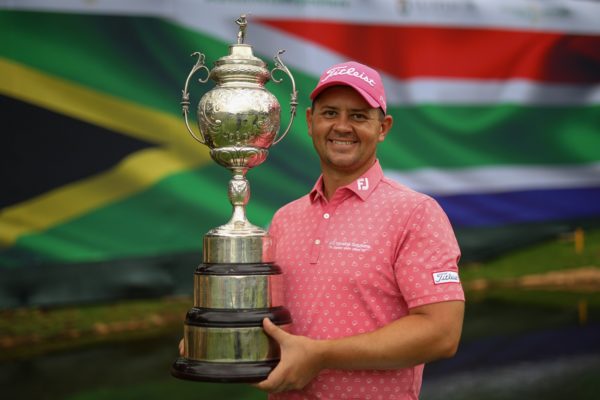 The South African Open came to a thrilling conclusion at a squelchy Gary Player Country Club on Sunday, with Daniel van Tonder holding off Oliver Bekker to claim the title by one stroke with a dramatic 25-foot birdie putt on the 18th hole.

Bekker and Van Tonder had been tied on nine-under-par, four strokes behind leader Justin Harding, at the end of the third round when it was completed on Sunday morning.

While Van Tonder took control of proceedings with three birdies in four holes from the eighth to take a two-stroke lead, Bekker came with a late charge as he birdied the last three holes.

The seven-time Sunshine Tour winner was inches away from making eagle on the 18th when his 60-foot putt stopped just next to the hole. By then, Van Tonder was in the middle of the final fairway and knew he had to make birdie to win.

More drama was to come though as Van Tonder’s approach only just cleared the water, stopping right next to the yellow markers. He then duffed his chip way short, leaving him with a 25-foot putt for birdie and the win.

Fortunately, Hennie du Plessis had a similar birdie putt just before him, which he made to finish third on 12-under-par.

Treading gently is not something the 30-year-old from Boksburg does often and Van Tonder stepped up and nailed the slightly curving putt with confidence.

“All I was thinking was just make the thing, give it a chance. The whole day I had been leaving putts pin-high or lipping out, so I just had to make sure I hit it,” Van Tonder said after his final round of 65.

“If it goes in, I win, if it stays out then I’m in a playoff. And when it went in I just thought ‘Finally!’.

While Bekker played some amazing golf, chipping in three times on Sunday (making it five for the week), Van Tonder played some tremendous shots of his own.

On the water-lined eighth hole he made a 20-foot birdie putt after having to hit his approach with a mud ball from the rough, and then on the 10th he chipped in from the bank above the hole for another birdie.

On the par-three 16th, his superb tee-shot was right on course for the hole and he was left with a five-footer for birdie.

“I’ve been seven and nine shots behind and won. I just play my own game, which is looking for birdie putts,” Van Tonder said with a twinkle in his eye while clutching the magnificent SA Open trophy.