While the majority of runners are based on the Highveld, the final field includes Secret Captain from the KwaZulu-Natal 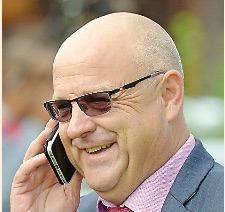 London – Forest Ranger can take a starring role on day one of the Western Meeting at Ayr today by winning the William Hill Doonside Cup Stakes.

There are obviously much bigger events to come over the next couple of days, but this Listed heat provides an excellent opportunity for Forest Ranger to gain a deserved victory a er some decent efforts in better company. The Lawman colt has been highly tried since picking up an excellent pot when winning the Burradon Conditions Stakes at Newcastle on his seasonal bow back in April He clearly fell short when well beaten in both the Dante and St James’s Palace Stakes, although he was not disgraced, and a couple of places in Group 3 company recently suggest he is probably not far short of that calibre.

Beaten under a length in the Strensall at York last month, Forest Ranger looked as if this return to 2000m would be just what he needed, while he has shown he can deal with ease in the ground in the past, too.

The conditions of this race leave him well in the with the top-rated pair of Brendan Bracken and Frankuus and Forest Ranger can take full advantage.

Jet Streaming can make Adrian Keatley’s journey across the Irish Sea pay dividends in the British Stallion Studs Scottish Premier Series EBF Fillies’ Handicap. Winner of two of her last four starts, this Born To Sea filly came unstuck on Irish Champions Weekend as she was maybe a bit too keen early on, but can get back on track here. Fighting Irish catches the eye as he switches to handicap company in the 1200m nursery at Yarmouth.

As a son of Camelot, it would be reasonable to expect Harry Dunlop’s charge to really come into his own at three, but he has been punching his weight in four juvenile outings so far. Winner of a reasonable maiden at Salisbury in July, Dunlop then gave him a break before Fighting Irish returned in a novice event at York earlier this month. He was found wanting under a penalty behind the impeccably bred and highly regarded Elarqam, but his current mark of 77 looks a fair assessment and so ground this time is a definite plus.

Alqamar may not be the most straightforward of horses but he could be good enough in the “Get On” With Dan Hague Handicap. He was gelded following an unplaced run at the Royal meeting back in June and while his attitude did not totally convince on his return at Ascot earlier this month, he clearly has the ability on a going day.

Innoko perhaps found 3300m a bit too much of a test last time so dropping back in trip for the Bath Summer Staying Series Final Handicap should be in his favour. Tirania is the pick in the EBF “Breeders’ Series’ Fillies” Handicap at Pontefract after getting back on the winning track last time out. – Press Association