Ferraris’ ambition to ride in Hong Kong has been driven by the fact that he grew up there. 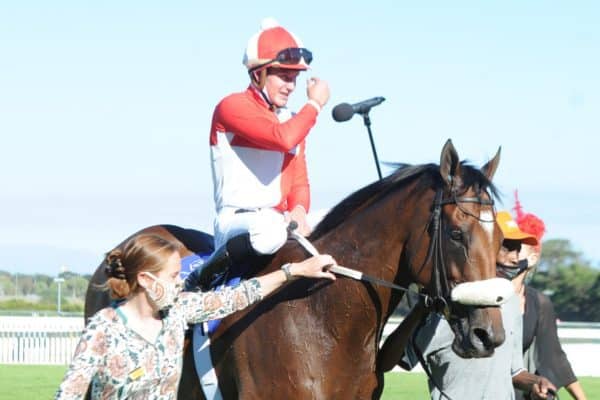 South Africa’s two-time champion apprentice jockey, Luke Ferraris, has been unveiled to an expectant Hong Kong media ahead of his first season riding in the racing-mad city.

The 19-year-old has been granted a much-prized riding licence by the Hong Kong Jockey Club (HKJC) following his phenomenal run of Grade 1 victories on South African tracks.

The South China Morning Post newspaper reported this week that Ferraris started 2021 thinking his best chance of making it to Hong Kong was via a stint in Australia, but the big race-winning spree now has him living his dream far sooner than expected.

Ferraris was in the process of obtaining an Australian visa when he won the Cape Town Met aboard Rainbow Bridge in January and then racked up four more top-level victories, including two on his way to taking out the Triple Crown at Turffontein aboard Malmoos.

“To win the Triple Crown with two Group 1’s in it was massive for me and it’s impacted my career hugely,” Ferraris said at the press conference.

Ferraris’ ambition to ride in Hong Kong has, of course, been driven by the fact that he grew up there with his father, David, having been one of the leading trainers in the Chinese enclave since 2003.

He spent his childhood in the thick of the action at Sha Tin racourse and training centre, so he is under no illusions about what he’s up against as he tries to carve out a career in one of the world’s toughest jurisdictions.

When Ferraris expressed a desire to become a jockey, his father had no hesitation in sending him back to his homeland to enrol at the world-renowned South African Jockey Academy at Summerveld in KwaZulu-Natal.

After tasting early success on the KZN tracks, he moved to Joburg and was apprenticed to his grandfather Ormond, the then doyen of local trainers.

Ferraris was profuse in his appreciation of what the old master of Turffontein taught him in those brief couple of years – before the big breaks came.

After riding work in Hong Kong for the first time last Saturday, and trialling three horses for his dad on Tuesday morning, he was itching to taste the real thing at the season-opening meeting on 5 September, the SCMP reported.

“There was always the line of thought that maybe he needed that step in Australia but he kept blossoming in South Africa and, with his connections here, it just seemed to be the right peg in the right hole,” Jockey Club licensing committee secretary Terry Bailey told the press gathering.

HKJC officials are expecting 15 000 people at Sha Tin for the first meeting of the new season next week – not quite the 50 000-plus normally present at the curtain raiser, but it will be the biggest crowd the city has seen since the start of the pandemic in early 2020.