Proteas keep their heads up 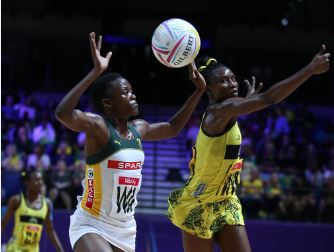 Despite falling to Jamaica in their opening match of the tournament, Proteas coach Dorette Badenhorst believes the national side can hit back against hosts England tomorrow at the Netball Nations Cup.

While they put up a fight in the closing stages of their clash against the Sunshine Girls, the SA team were handed a 59-54 defeat in Nottingham on Sunday.

“Well done to Jamaica. They really played well and beat us on speed,” Badenhorst said after the game.

The Jamaicans took the early lead and extended their advantage throughout the first half, and they capitalised on their momentum by maintaining a 10-point advantage for most of the third quarter.

The Proteas fought back in the last 15 minutes, however, finding a breakthrough up front against a solid Jamaican defence.

While the South Africans were held off at the death, Badenhorst was confident they had the potential to secure crucial points against hosts England tomorrow and world champions New Zealand on Friday, in an attempt to book their spot in this weekend’s trophy playoff at the four-nation event.

“It was not the start we wanted and it’s quite disappointing, but we will go back and really work hard to beat England and New Zealand and get into the final,” she said.

Having beaten England twice last season, Badenhorst felt they had the ability to outclass them again in their midweek clash against the Commonwealth Games champions, to be played in Birmingham.

“I think it’s all about trust, and it’s just about believing in each other and the new combinations,” she said.

“I believe we can do well in this competition and we will come back stronger.

“We could have done better tonight, but we will take lessons from this.”