The SA men's hockey team kept their playoff hopes alive with a stunning victory over Germany. 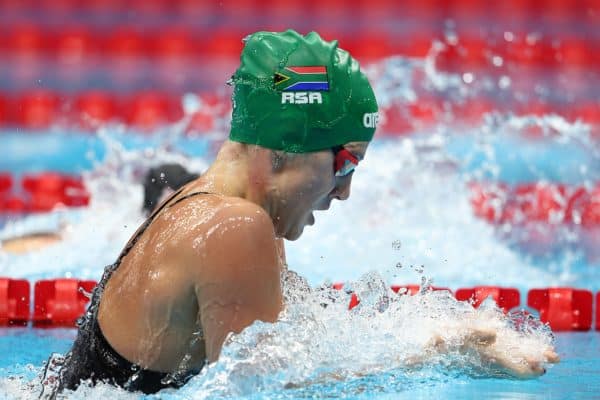 Kaylene Corbett of South Africa qualified for the 200m breaststroke final with the fourth fastest time on Thursday at the Tokyo Olympics. Picture: Jonathan Nackstrand / AFP via Getty Images

Tatjana Schoenmaker was delighted for teammate Kaylene Corbett on Thursday, as they set up a rare opportunity for a South African podium double in the women’s 200m breaststroke at the Tokyo Olympic Games.

Schoenmaker shone again in the semifinals, touching the wall in 2:19.33, more than a full second clear of the rest of the field and just 0.17 outside the Olympic record she had set in the heats.

Corbett, meanwhile, won her semifinal in 2:22.08, slicing another chunk off her personal best and progressing as the fourth fastest qualifier for the final.

“That’s a massive achievement for her,” said Schoenmaker, who was delighted to have her compatriot joining her in the battle for medals.

“She’s probably had the biggest smile on her face.”

Schoenmaker and Corbett will line up in the final at 3.41am on Friday.

Elsewhere in the morning session on day six of the Games, the SA men’s hockey team kept their playoff hopes alive with a stunning victory over Germany.

Mustaphaa Cassiem, Keenan Horne, Matthew Guise-Brown and Nicholas Spooner all scored for South Africa as they secured a 4-3 win over the Germans, who have stepped on the podium at the last four editions of the Olympics.

While the SA men can still progress to the quarter-finals, they will need to improve their goal difference by crushing Canada in their last group match on Friday to have any chance of reaching the last eight.

On the golf course, Christiaan Bezuidenhout was three-under-par after the first round of the men’s tournament.

Though he was lying in a tie for 13th in the provisional rankings, many players in the field still needed to complete their rounds after play was suspended by poor weather conditions.

Garrick Hugo, the other South African in the field, was two shots further back at one-under-par, but he still had four holes to play.

On the BMX track, cyclist Alex Limberg settled for sixth place in all three of his quarter-final runs and he was eliminated ahead of the semifinals.

And the national men’s water polo team were handed their third defeat of the tournament, with Hungary romping to a 23-1 victory in their pool match.