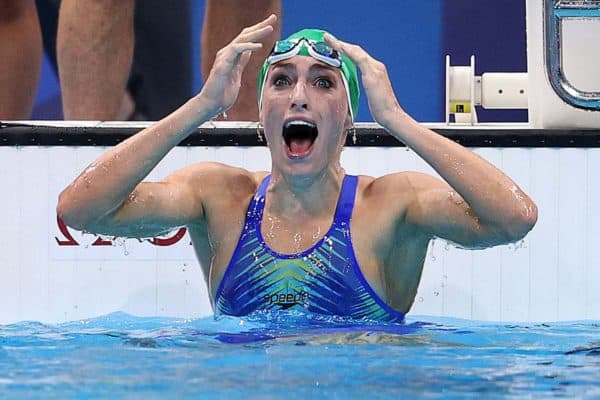 South Africa's Tatjana Schoenmaker reacts to her winning and setting a new world record in the women's 200m breaststroke event at the Tokyo Olympics on Friday. Picture: Getty Images

The SA team will return home with only three medals after finishing 52nd in the final standings at the Tokyo Olympic Games, which came to a close on Sunday.

While there were more lows than highs for the national squad, especially in the second half of the Games, there were some reasons to celebrate.

The 24-year-old swimmer also bagged silver in the 100m breaststroke after setting an Olympic record (1:04.82) in the heats.

In discussions before the Games, Buitendag was hardly mentioned among the potential medal contenders.

But she produced the performance of her life, with surfing making its Olympic debut.

Buitendag beat seven-time world champion Stephanie Gilmore of Australia in the third round, and the 27-year-old South African went on to secure a memorable silver medal.

His result in the men’s 100m final was painted as a disappointment, and Simbine was clearly gutted after narrowly missing out on a medal at another major international championship, but his effort was by no means a disgrace.

He grabbed fourth position in 9.93, just 0.04 outside the podium, cementing his place as one of the most consistent sprinters in the world with another impressive performance at the highest level.

Though her compatriot Schoenmaker stole the show and the headlines, Corbett produced a remarkable breakthrough in the 200m breaststroke.

Setting personal bests in all three rounds, she finished fifth in the final in 2:22.06, delivering one of the SA team’s biggest surprises of the Games.

At the age of 21, Blignaut is one of the country’s most exciting talents, and he proved his potential once again by finishing sixth in the shot put final with a 21.00m heave.

The former world junior champion has repeatedly shown he can perform under pressure, and he will be aiming for the Olympic podium at the Paris Games in 2024.