The unknown 22-year-old prop will scrum against the mighty Jaguares on Saturday to complete a quick rise from obscurity. 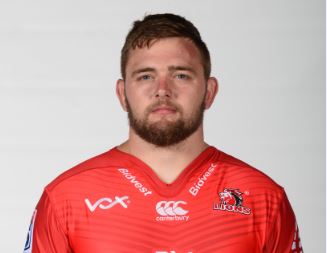 Johannes Jonker is another underrated gem the Lions hope to have unearthed. Photo: Gallo Images.

About a year ago, Johannes Jonker came up with lowly Border to Ellis Park and unexpectedly beat a fancied Lions side during the Currie Cup qualifying tournament.

On Saturday, the 22-year-old will play at tighthead against a Test-quality side, the Jaguares, in Buenos Aires – for the side he plotted against 11 months ago.

It’s typical of the Lions to recruit this way, always looking for a bargain.

Also read: The Lions’ A-team for Argentina ain’t so A-list after all

One of the myths was that the scouts at Ellis Park saw Jonker during the game and were convinced to chase him.

Yet the story is actually even less scientific than that.

“I was actually watching Border playing on television in one of my hotel rooms,” said Johan Ackermann, the Lions head coach.

“I saw Johannes play quite well and thought to myself this is someone to look at. We started making enquiries about him and followed him around a bit. There is definitely potential and we decided to take a punt.”

This is a man who went from playing lowly first division rugby at the end of last season to straight into Super Rugby action.

There was no “in-between” exposure for him to get used to the massive jump between facing the Griffons and facing the Jaguares.

He’s already made two appearances as a substitute this season, now Jonker is a starter.

“Johannes joined us in the off-season and trained really well,” said Ackermann.

“He carried a niggle that prevented him from playing his best in the warm-up matches but recovered really quickly. We still see the things in his play that excited us last year.”

The Lions coaching staff are undoubtedly taking a risk in promoting him so early, especially as he’s come on in the past two matches will the scrum well set.

But Ackermann isn’t worried because he believes Jonker will tread the same path as the man he has to deputise for: Springbok Julian Redelinghuys.

“I believe he has the ability to become just as good as him. And it’s never a bad thing to expose a player to a big test early on.

“Julian got hammered in 2014’s tournament by the Crusaders’ All Black front row. Look how he took that lesson in his stride. We’re hoping Johannes follows the same path.”

That’s supposedly the same reasoning for Ackermann and co promoting 21-year-old Shaun Reynolds – a young man with a big boot – to steer the ship at flyhalf.

And, to date, this type of faith is working.