Madosh Tambwe has the Lions roaring for a specific reason

The 19-year-old winger makes his Super Rugby debut against the Reds on Saturday and that promotion is rather significant. 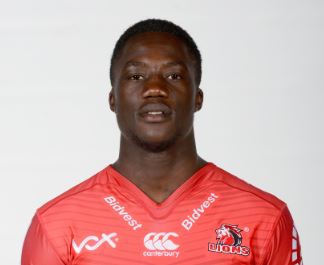 Madosh Tambwe's rise in the Lions setup has been quick. Photo: Gallo Images.

Madosh Tambwe is any development officer at a rugby union’s dream.

South African rugby is known for its domestic teams poaching young talent from other provinces.

It’s therefore understandable that the Lions will push out their chests a bit when the 19-year-old winger makes his Super Rugby debut against the Reds at Ellis Park on Saturday.

Tambwe is the player every union strives to produce: a homegrown prospect.

He went to Parktown Boys High, played Craven Week for the Lions and was dominant in last year’s Under-19 Currie Cup, which was won by the Johannesburg-based union.

More importantly, Tambwe – who was born in Kinshasa in the Democratic Republic of Congo – crossed the tryline a staggering 16 times in the provincial youth competition.

But the jump from Under-19 to senior level isn’t an easy one, which makes the teenager’s rise even more remarkable.

Tambwe was unexpectedly included as a starting player in the pre-season and responded with four tries in two matches.

“He is just an exciting player, a local guy and we’re very excited for him,” said Lions coach Johan Ackermann.

“We’re hoping this will be one of the exciting steps for South African rugby because he is a good talent, well-built, strong and with enough speed. Hopefully he will enjoy his debut.”

In fact, Tambwe’s form before the start of the current campaign was so good, some quarters even expected him to make his debut earlier.

Yet Ackermann and his coaching staff resisted the temptation initially.

Lionel Mapoe – who has since shifted back to his preferred position at outside centre – and Anthony Volmink’s struggles though have led to a change of plan.

The Lions were so keen to get Tambwe involved this week, he was plucked away from the Baby Bok training camp in Stellenbosch.

“He worked very hard during the pre-season. We threw him in as we did in the last few years with a number of youngsters,” said Ackermann.

“It’s a big test for him playing against an international side. If you look at the Reds backline there are stars all over but he must just play to his abilities and enjoy the moment. He has enough senior players around him to make him feel settled.”