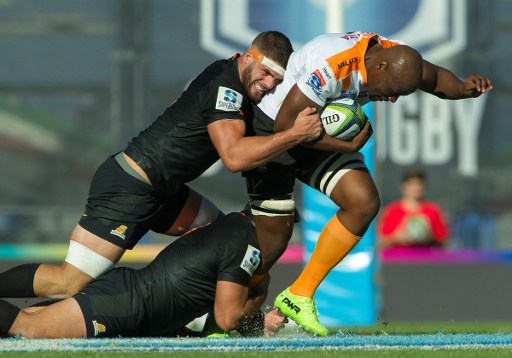 The Cheetahs never threatened to overhaul the early buffer established by the Jaguares but they can feel heartened by a 41-14 loss in Buenos Aires on Saturday night.

No one could’ve reasonably expected the central franchise to beat Test-quality opposition with a staggering nine changes to the match squad.

But all those switches in personnel certainly didn’t mean the Cheetahs played like a B-team.

One of the things coach Franco Smith said before the start of the campaign is that he feels the Cheetahs have picked an extended squad capable of performing at this level.

In other words – unlike previous years – his side has the depth to compete.

And there’s certainly evidence that this group of players can develop into a good unit.

Starting a deficit of 7-24 in the face at half-time, the Cheetahs didn’t collapse in the second half.

To be honest, they dominated long periods and were only denied points by their own poor handling and perhaps some questionable tactics.

The Cheetahs tried to run everything inside their own half when they could’ve been more varied and kick one of two times to gain more territory.

Nonetheless, Smith will be pleased that his troops showed intent and were eventually rewarded by a try for replacement hooker Joseph Dweba.

Unfortunately, the damage had been done in the first half by a Jaguares sides bragging with some superb attacking play.

Winger Ramiro Moyano, who completed a hat-trick in the dying moments of the game, was the beneficiary of some magnificent off-loading and support play as he dotted down twice.

Lock Matian Alemanno also exploited some poor close-range defending by the Cheetahs as he powered over following multiple pick-and-go movements.

Strangely though, the Jaguares sunk badly after the break as they themselves handled the ball poorly and it was only the Cheetahs’ wastefulness that prevented them from being run more closely.

Moyano’s third try and a penalty try at the death inflated the winning margin.

Sharks boss satisfied, full of praise for returning Boks after Bulls win
1 hour ago
1 hour ago

URC preview: Stormers and Lions ready to rumble
5 hours ago
5 hours ago

Sharks boss satisfied, full of praise for returning Boks after Bulls win
1 hour ago
1 hour ago

URC preview: Stormers and Lions ready to rumble
5 hours ago
5 hours ago