The Wallaby flyhalf's sending-off killed the contest at Ellis Park but the visitors shrug off the sanction as it was more than fair. 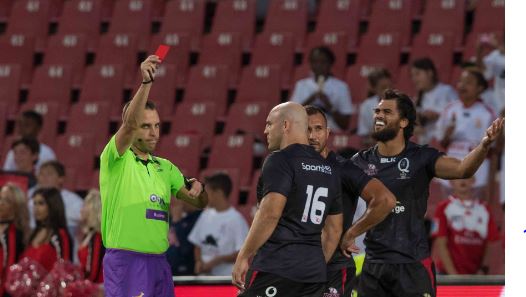 Reds coach Nick Stiles lauded the Lions for their intensity on the attack and the incredible pace they play the game with after his team were mauled 44-14 at Ellis Park on Saturday.

The Australians, who were unlucky not to have beaten the Crusaders a week before, paid dearly after flyhalf Quade Cooper was red-carded early in the second half for a neck tackle on Lions centre Rohan Janse van Rensburg, who was in the process of scoring the Lions third try.

“A red card against a team like the Lions who loves to move the ball wide and do it exceptionally well was a killer blow for us,” said Stiles.

At the time of Cooper’s offence, the Lions stormed into a 20-0 lead and Stiles said he had no problem with referee Mike Fraser ending Cooper’s stay on the field.

“Look, the red card was tough to deal with and quite hard on us, but that’s what it is and the referees won’t change. They have been ordered to be severe on those kind of offences,” he said.

“But the Lions deserve their credit and are a good side. They ultimately hurt us at the end of the game.”

The Reds, who have been a lot more competitive this year and after beating the Sharks, lost narrow matches against the Force and the Crusaders, could however regret spilled opportunities early in the game.

“I spoke to the boys at halftime, in that first half we had about five opportunities in that about 40 meter range,” he said.

“We had good ball carry but we didn’t build enough pressure, a good clean-out could’ve given us momentum, but then we tried to force something instead of sticking to some of our systems.”

The Lions play away to the Kings this weekend while the Reds have to make the challenging trip to Buenos Aires to face the high-flying Jaguares.