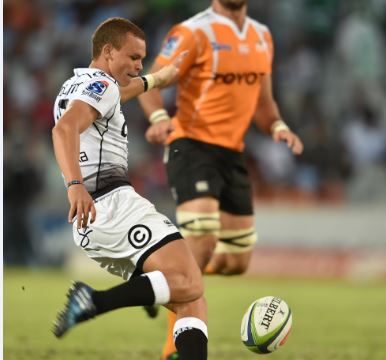 Curwin Bosch was outstanding in the City of Roses. Photo: Johan Pretorius/Gallo Images.

It’s depressing to think about South Africa’s flyhalf situation at the moment.

Pat Lambie is sidelined with a back injury, Handre Pollard is taking ages to find his form after a long absence and Elton Jantjies continues to mix the good with the bad.

But on Saturday evening, an intriguing possibility suddenly emerged: a 19-year-old fullback.

Is the Sharks’ Curwin Bosch destined to unexpectedly pull over the No 10 shirt against France in June?

That should keep us debating for a while.

Whether it be fullback or flyhalf, Curwin Bosch is a Bok-in-waiting

Sharks coach Robert du Preez was understandably cautious on what his young prodigy’s prospects look like later this year.

The teenager, who played flyhalf in the 38-30 win over the Cheetahs, was outstanding in contributing 18 points.

Given how calmly he’s adapted to Super Rugby, Bosch is a prime candidate to be fast-tracked to the national team.

But is it a good plan?

“We just need to be careful about Curwin because he’s still young and we still need to look after him. However‚ he’s one for the future.”

Maybe Du Preez is also diplomatic because Lambie is expected to return in May.

“Curwin’s ready to play flyhalf now and when Pat is back‚ we’ll be in a good position and Curwin will go back to fullback.”

Johan Ackermann’s troops started their match against the Kings like a house on fire, running in five tries to lead 35-12 at halftime.

But their second half performance was dreadful as a freakish amount errors saw them plod along.

On paper, a bonus point win by 42-19 is exactly what the Lions wanted but their coach is wary of them staying inconsistent.

They can get away with it this year in their conference yet it could be damaging in the play-offs against New Zealand sides.

“We lost our intensity and made poor decisions,” said Ackermann.

“We kicked when we should’ve passed and vice versa. We know now there are a lot of things to work on.

“We can’t take things for granted. If we played like this against a New Zealand side, we would’ve been punished.”

A decision on how many local sides will be cut from next year is expected on April 6.

Till then, it’s a nervous wait for the Cheetahs.

Preliminary indications are that only the Kings will be sacrificed as Sanzaar, the governing body of Super Rugby, tries to streamline the tournament to make it more attractive.

Yet funnier things have happened and the central franchise is wary.

Coach Franco Smith believes the uncertainty contributed to their loss against the Sharks.

“There’s a lot of pressure and some of it forced by the question of the franchise‚” he said.

“Some of it is from the outside and that’s something we can’t control and the guys don’t want to disappoint. I know outside influences have played a role in how we’ve played. It’s tough but we know we have to deal with it.”

Hopefully, it spurs them on.

“We merit to stay in this competition and the whole of the central part of South Africa merits this franchise. I think we need to forget about happened in this game and prove that we’re a good team,” said Smith.

To date, the Stormers’ draw has been relatively easy.

They were only really tested by Jaguares and still managed to win.

On Saturday in Singapore, they looked in big trouble against the rapidly improving Sunwolves.

And yet it always looked as if the Capetonians had an extra gear in reserve, winning 44-31 in the process.

“We had a good chat at half-time, there was no panic. We just had to get back to what we had planned to do,” said coach Robbie Fleck.

“It was a pretty powerful performance in the second half in tough conditions. It is a young group and everyone played their role. That is hugely positive.”

Where are the Kings’ forwards?

The Kings have some underrated gems in their backline and it showed with the three tries they scored against the Lions.

But for a squad that, on paper, boasts decent forwards, they certainly aren’t pulling their weight.

If that doesn’t improve, the Kings won’t either.

“If you want to use your backline to score points, the forwards need to provide a platform. We’re not giving the backs good ball at the moment.”