The Lions leave it late to finally win a Super Rugby derby at Ellis Park that was eventually high in quality. 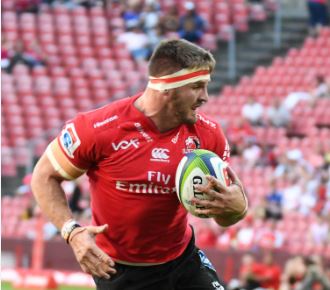 In an excellent advertisement for South African rugby, the Lions had to pull out all the stops to edge a revitalised Sharks team 34-29 at Ellis Park on Saturday evening in a pulsating Super Rugby clash.

The Lions eventually outscored the Sharks, who lead 16-13 at the break, by three tries to two but it took a 77th minute try from Lions flanker Jaco Kriel to seal the deal.

Lions flanker Jaco Kriel did not only score a crucial try three minutes from time but his work-rate was incredible. He was the Lions’ key player at the breakdown and eventually subdued the Du Preez twins, Jean-Luc and Daniel, who put huge pressure on the home side in the first half.