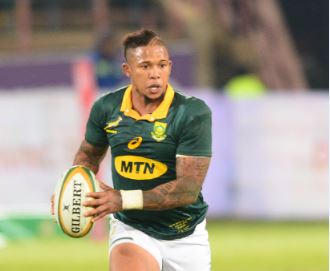 The proof still lies in him performing consistently at international level but there are encouraging initial signs that Elton Jantjies has turned a new leaf.

The 26-year-old Lions pivot delivered his best performance at Springbok level by far in last weekend’s win over France.

And Allister Coetzee, the national coach, believes there’s a simple reason for that: Jantjies is embracing leadership.

“He’s part of the leadership group in our side,” the Bok coach said.

It’s a sentiment that’s been shared by Lions and South Africa ‘A’ coach Johan Ackermann.

He previously mentioned that Jantjies’ excellent form in Super Rugby is down to him focusing on doing the basics well.

At Loftus, the flyhalf clearly didn’t try to over-complicate things and it generally paid dividends.

“Elton has been playing consistently well this season for the Lions. There is a different kind of pressure in Test rugby, though, it’s very different to that of Super Rugby,” said Coetzee.

“What’s been obvious to me is how Elton is now enjoying the pressure of international rugby.”

But Jantjies’ resurgence isn’t just down to his own form.

Also read: ‘The plan’ comes together for impressive Ross Cronje

Coetzee was also quick to laud the influence of inside centre Jan Serfontein in positively influencing his Bok pivot.

“He provided the balance with his experience,” he said.

“That is what you want from a player with 27 Test caps. He has an unbelievable workrate and helped Elton a lot.”

That support play is perhaps also down to the improved overall communication between the backline.

Yet it shouldn’t overshadow Jantjies’ improvement.

“Elton’s got a great understanding of how we want to play. He knows how we want to manage the balance between kicking and running. He also knows what we want to do in terms of spotting space,” said Coetzee.

“Obviously he can’t do all of that himself. There are others in the backs who have to assist him in that respect. That makes it easier for Elton to choose the right option.”

Will it be derby December for SA's URC teams?
4 hours ago
4 hours ago

Will it be derby December for SA's URC teams?
4 hours ago
4 hours ago