Coach Allister Coetzee heaps credit on a bunch of players who he believes have become far better conditioned. 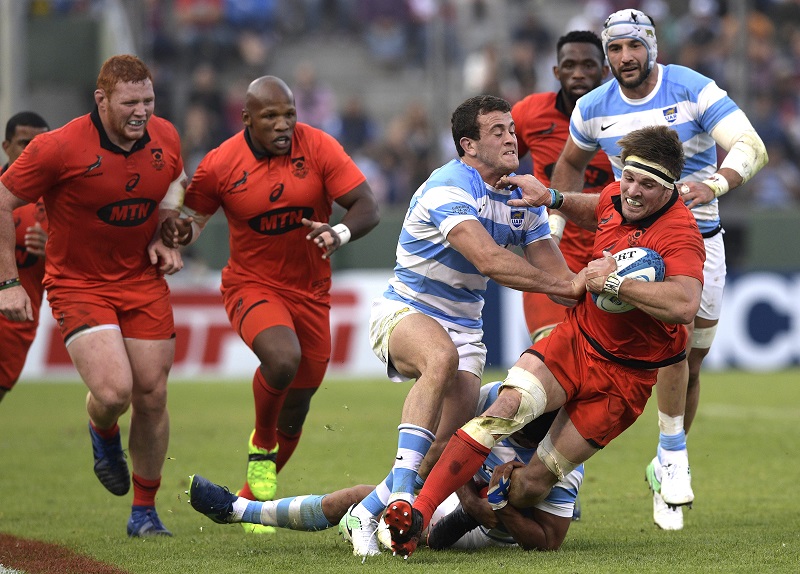 The Springboks are top of the Rugby Championship log. Photo: Juan Mabromata/AFP.

The Springboks have risen to the top of the Rugby Championship ladder after their 41-23 bonus point win over Argentina in Salta at the weekend.

Not only was it their first away win since 2015, but their second straight victory in this year’s competition ensured they were placed above New Zealand based on points difference (40 against 26) with both teams on nine points.

The Springboks are unbeaten after five matches this season and are set to climb to third in the world rankings, which is expected to be updated on Monday.

Enjoying a fine run of form, their latest result marked only the second time the Boks had scored four of more tries and 35 or more points in five successive Tests.

Thrilled with his team’s efforts despite a somewhat nervous start, Springboks coach Allister Coetzee put their latest performance down to meticulous planning.

“We changed our travel plans this year, preparing for two days at home before flying to Argentina on the Wednesday, which is also our off-day,” Coetzee said.

With flank and Man of the Match Siya Kolisi growing in stature every week, scoring two of the Boks’ five tries on Saturday, there was also a resurgent performance from prop Beast Mtawarira, as well as huge bench impacts from lock Pieter-Steph du Toit and flank Jean-Luc du Preez.

Equally impressive was Elton Jantjies’ kicking record, with the flyhalf slotting over 89% of his attempts in the last six Tests (34 successful kicks out of 38).

The Pumas, meanwhile, did themselves no favours with their poor discipline.

Lock Tomas Lavinini was shown a red card after knocking the ball down, which could have led to a Kolisi hat-trick, after he had earlier been given a yellow following a dangerous tackle on Bok prop Coenie Oosthuizen.

Coetzee credited his players’ self-discipline in conditioning as one of the reasons for their success.

“The players have looked after themselves in terms of their conditioning and recovery, and here our medical and conditioning staff deserve a good mention,” he said.

“We want to play with high intensity and our players have a very high work rate.”

After returning to South Africa tomorrow morning, team management confirmed the squad would have a couple of days to recover before getting together on Friday for their two tough away matches against the Wallabies and All Blacks.