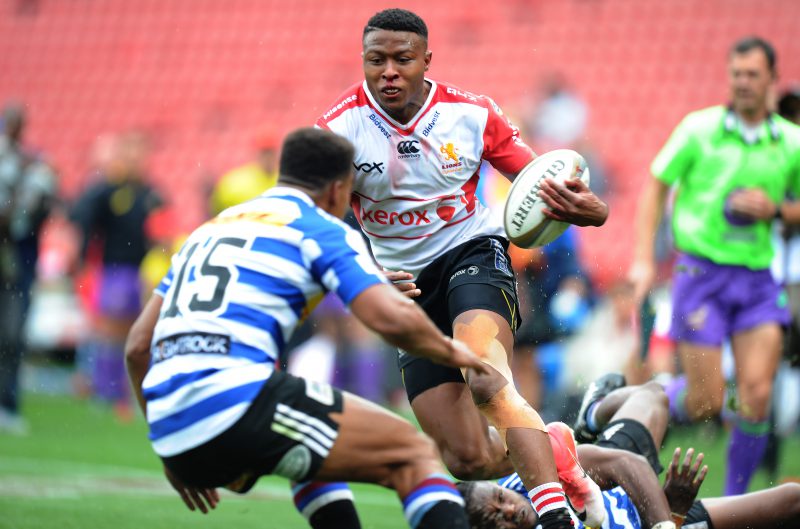 Lions wing Aphiwe Dyanti got the hosts back on track. Photo: Gallo Images.

The Golden Lions kept their Currie Cup playoff hopes alive with a pulsating bonus point 29-20 win over Western Province at a wet Ellis Park on Sunday.

The Lions, who move back into fourth place, had to stage a brave second half fightback after trailing 17-10 at the break.

They did so emphatically by outscoring Province 19-3 in the second half.

Wing Aphiwe Dyantyi got the ball rolling in the 58th minute with a try that showed his skills as a poacher but he was brought back down to earth moments later when he fluffed another chance with the tryline beckoning.

However, he was bailed out by rookie lock Rhyno Herbst in the 72nd minute when he first made a crucial line-out steal before barging over.

Rohan Janse van Rensburg showed his raw power in clinching the match for the hosts though he was on the right end of a decision by TMO Pro Legoete. Replays seemed to have suggested that Province wing and Blitzboks star Werner Kok got his hands underneath the ball.

A highveld hail storm suspended play briefly before halftime with Province going into the shed leading 17-10 after scoring two tries against one in the opening half.

No 8 Nizaam Carr scored Province’s opening try in the 15th minute for a lead of 10-0 before the Lions levelled matters 10-10 in the 28th minute with their first try by wing Sylvian Mahuza.

Province, who dominated early proceedings, then scored their second try in the 31st minute by flyhalf Robert du Preez to go into the break seven points in the clear.