Beast Mtawarira has Springboks in a flap before Wales

With various experienced men already unavailable for Saturday's clash in Cardiff, the Boks are now probably their veteran prop short too. 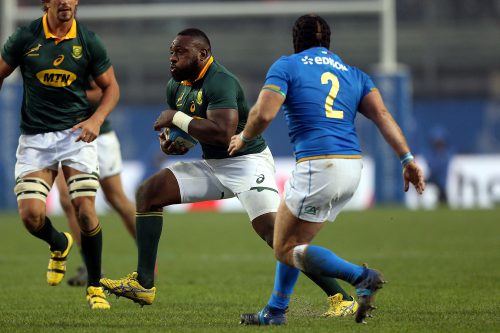 Beast Mtawarira's season is likely over after his injury against Italy. (Photo by Gabriele Maltinti/Gallo Images) *** Local Caption *** Tendai Mtawarira

A serious groin injury to veteran prop Beast Mtawarira and the exit of three of their biggest stars have given the Springboks a headache ahead of their final Test of the year against Wales in Cardiff this week.

Mtawarira left the field in the 27th minute of the national team’s resounding 35-6 win over Italy in Padua at the weekend, while flank Francois Louw, No 8 Duane Vermeulen and lock Franco Mostert had to return to their overseas clubs after the clash.

The Bok camp confirmed that Mtawarira was doubtful and a final decision on him would be made later in the week.

The Sharks’ Thomas du Toit will fly out to Wales as cover.

The losses of Vermeulen and Louw were expected to hurt the make-up of the Boks’ back row, with this weekend’s Test falling outside the international window.

The team did, however, retain the services of their fourth foreign-based player, flyhalf Elton Jantjies, who had been granted permission to stay with the squad.

Flank Siya Kolisi was also set to rejoin the squad after briefly returning home for the birth of his second child.

Embattled Bok coach Allister Coetzee, who was linked last week with Japanese club the Canon Eagles ahead of the new year, felt the team had conducted themselves well in the wet conditions.

“I think it was a very clinical effort, especially by our pack of forwards, who laid the foundation for a pleasing performance. And the backs adapted well in being direct,” Coetzee said.

“You have to work very hard up here in the Northern Hemisphere and be able to adjust your game, which I thought we did very well.”

The Welsh challenge this weekend will pose a different challenge, despite their 33-18 defeat to the All Blacks at the weekend.

But the Boks kept the Azzurri tryless for their biggest victory in Italy since 1997, while the haul of five tries was the most scored by the South Africans on Italian turf.