How will the Springboks (probably) conclude a bumpy era?

It's popularly thought that the Test against Wales will be Allister Coetzee's last in charge of the national team. 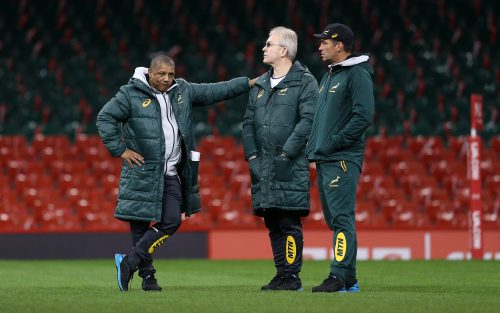 The end of another era is bound to arrive for the Springboks in Cardiff against Wales on Saturday as they conclude their season which has been a fairly bumpy ride.

The Boks have a chance to record a third straight win on tour after victories over France and Italy, but unfortunately the tour will be remembered for that depressing opening 38-3 loss against Ireland.

It is apparently that performance against the Irish which finally made up the minds of the powers-to-be at Saru that Coetzee is not the man to take the team forward.

Noises have become louder this week that Kings coach Deon Davids will be roped in some capacity within the mangement with new director of rugby Rassie Erasmus calling the shots, but first the Bok coach will have to go through a strenuous review process later this month.

The Boks could salvage some lost pride today after losing the last two times they visited Cardiff – 12-6 in 2014 and 27-13 last year – only the third time the Welsh had beaten the once proud Boks.

Both teams had to reshuffle their sides because of the international window, but Coetzee said Wales still boast a formidable line-up.

“We expect another gruelling contest against a strong Welsh team,” said Coetzee.

“It is another opportunity for this side to develop and grow, playing at the Principality Stadium in front of a passionate crowd of more than 65 000.”

Coetzee said that some of the changes he has made for this match – starts for fullback Warrick Gelant, albeit out of position on the left wing and No 8 Dan du Preez as well as potential debuts for scrumhalf Louis Schreuder and centre Lukhanyo Am from the bench – had been coming a while.

Coetzee said after the poor start against Ireland his hand had been forced to create more continuity and stability in team selection.

“It will be a different challenge altogether this week – Wales are renowned for their passing game and their width on attack.”

It’s that passing game that convinced him to name two flankers on his bench in Oupa Mohoje and Uzair Cassiem although neither actually could challenge Usain Bolt for speed.

“I decided to select two loose forwards on the bench because Pieter-Steph du Toit can cover lock, while Oupa and Uzair each have a skills set that can fit into different roles when needed,” said Coetzee.

The Springboks have won only three of their 11 Test matches when today’s referee, Jerome Garces, has been in charge.