The Lions and Bulls' second stringers were in action as they tried to impress their coaches for Super Rugby. 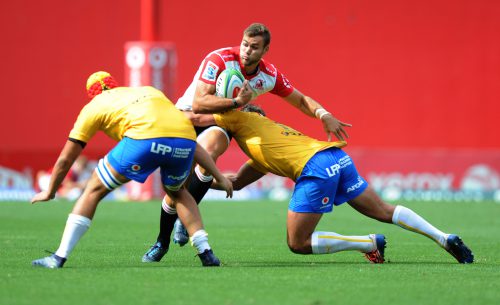 Shaun Reynolds showed he can be a decent deputy for Elton Jantjies at the Lions. (Photo by Gallo Images)

More often than not, not too much should be read in Super Rugby warm-up matches like Saturday afternoon’s hit out between the second stringers of the Lions and Bulls clashed at Ellis Park.

Coach Swys de Bruin mentioned earlier that the pre-season allows him to get a look at some of the fringe players in his group.

The same goes for the Bulls.

A few players managed to stand out in what at times became a fiercely contested battle on defence before the Lions greater fitness made all the difference.

The short blond-haired loan player from the Pumas proved to be a pain in the neck for the visitors by just being everywhere and slowing ball down.

His team didn’t quite get the same quality ball as the host but he made some sniping runs from out deep.

While his kicking boot was deadly accurate, he showed how full of running he can be by setting up the Lions’ second try by lock Marvin Orie. He looks a fine deputy to Elton Jantjies.

He showed why he built such a big reputation a junior level with his straight running and speed. Rass also set up speedy flank Hacjivah Dayimani up to race away for the Lions fourth try, illustrating his playmaking skills.

Others to impress were Lions wing Madosh Tambwe and flank Pikkie de Villiers from the bench.