Lionel Mapoe is outstanding against willing and skillful opponents as his side gets a difficult first Super Rugby hurdle out of the way. 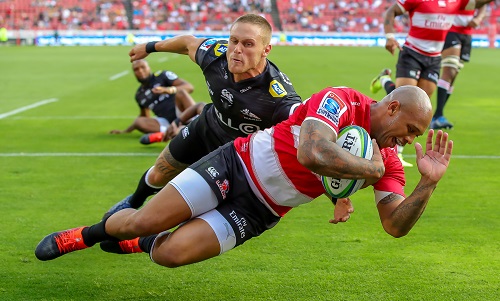 Everyone predicted it was going to be very close and in the end there was precious little to separate the teams as the Lions edged the Sharks 26-19 in their Super Rugby opener at Ellis Park on Saturday.

A sign of the tension was how Lions flyhalf Elton Jantjies fluffed two penalties and his Sharks counterpart Robert du Preez one as they both tried to build some scoreboard pressure in the last half an hour.

The Lions outscored the Sharks by two tries to one in the opening half but in the second period both teams scored two each.

With less than four minutes left in the contest it was the Sharks who camped on the Lions goal area and only desperate defence held them out.

Lions centre Lionel Mapoe was simply outstanding. Apart from his brace of tries, which brought the Lions back into the match when the Sharks threatened to seize control, his duel with new Springbok Lykhanyo Am was compelling. He defended his channel decently too.