But they held out in a Super Rugby match once again dogged by some very iffy officiating. 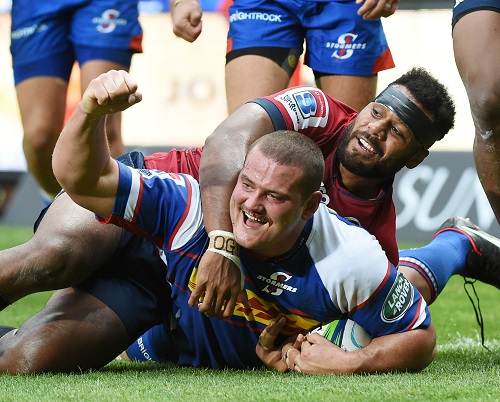 Wilco Louw of the Stormers during the Super Rugby match between DHL Stormers and Reds at DHL Newlands Stadium on March 24, 2018 in Cape Town, South Africa. (Photo by Thinus Maritz/Gallo Images)

The Stormers are starting to make louder Super Rugby noises despite a nervy 25-19 win over a physical and game Reds side at Newlands on Saturday afternoon.

Robbie Fleck’s troops raced to a 18-0 lead after scoring the opening two tries of the game but then lost some steam.

The Reds, who hit back with two tries either side of halftime, reduced the deficit to 18-14 and suddenly uncertainty crept into the Stormers’ game.

Some of referee Marius van der Westhuizen’s calls, however, left a lot to be desired, especially after at least two so-called crass-cutter tackles went unpunished.

Who was the star in this match?
Stormers left wing Raymond Rhule was involved in two crucial moments which allowed the hosts to build scoreboard pressure. First, he made a telling linebreak to link up with centre EW Viljoen, setting up the first try by scrumhalf Dewaldt Duvenage. He then brilliantly collected a chip from wing Craig Barry to score the Stormers third try of the game and showed some decent touches on defence too.