Robbie Fleck's side's inability to win away from home remains but the defeat against the Sunwolves also perhaps shows that they're simply not good enough. 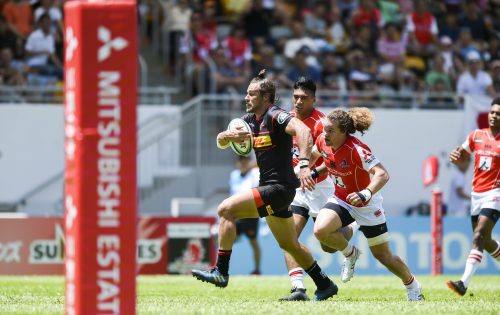 JJ Engelbrecht of Stormers moves the ball up during the Super Rugby match between Sunwolves and Stormers at Mong Kok Stadium on May 19, 2018 in Hong Kong. (Photo by Power Sport Images/Getty Images)

The Stormers have left themselves with a near impossible task to somehow still reach the Super Rugby playoffs after their shock defeat by 23-26 to the Sunwolves in Hong Kong at the weekend.

It was the Cape franchise’s seventh straight away loss, while the Sunwolves are enjoying the fact that they’ve recorded back-to-back wins for the first time in their history.

They beat the Reds by 63-28 the previous weekend.

Beforehand the Stormers decided to try and slow the pace of the game down because of the extreme humid conditions, but captain Chris van Zyl lamented that that plan only succeeded to a limited extent.

“We are obviously gutted with the result, but credit to the Sunwolves, they played really well,” said Van Zyl.

“I think in the first half we managed to stick to our plan really well but a couple of untidy turnovers cost us dearly.”

With just three minutes left, the Stormers still led 23-20 but then a late penalty by local hero and flyhalf Hayden Parker as well as a 84th minute drop goal sunk the visiting team.

“It was extremely humid conditions, but both teams were confronted by that so that’s no excuse. It’s been a good experience in Hong Kong but the team are very disappointed by the defeat,” said Van Zyl.

Sunwolves captain Willie Britz credited not only Parker for his heroics but also for the team, who never gave up fighting.

“We call him the guy with golden boot and he has never missed a kick in Japan. Hong Kong is now another home ground for us where he has also not missed a kick,” said Britz jokingly.

“It was an amazing feeling and the boys really did great out there. We obviously heard about the famous atmosphere here when the Hong Kong Sevens is hosted and it was a great experience today too.

“The guys came out in that second half and gave their all. It was really hot out there, but the way they just fought to the end was really great to witness.”