With the Jaguares still breathing down their necks in the South African conference, Swys de Bruin's men can't afford a slip-up against the Capetonians. 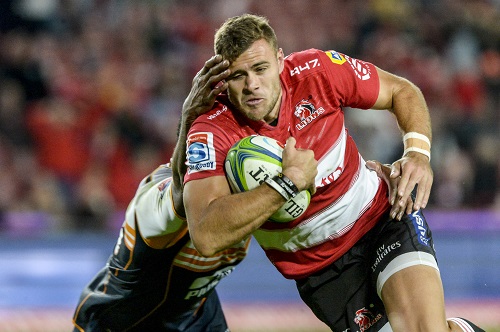 Shaun Raynolds of the Lions scores a try during the Super Rugby match between Emirates Lions and Brumbies at Emirates Airline Park on May 19, 2018 in Johannesburg, South Africa. (Photo by Sydney Seshibedi/Gallo Images)

This weekend’s Super Rugby derby showdown with the Stormers at Newlands is now looming large for the Lions.

South Africa’s conference leaders got back to winning ways with their 42-24 win over the Brumbies at Ellis Park, but the Stormers’ shock defeat to the Sunwolves in Hong Kong will make them a dangerous opponent, believes Lions coach Swys de Bruin.

“To put things in perspective, that Sunwolves team is a very good side. They have taken many teams like us right to the wire,” said De Bruin.

“I think people will start to realise now that they are a very good team and also a very well coached side.”

With this game being the last before the June international Test window arrives for the SA teams, there could be a lot at stake in Cape Town.

“The Stormers will be back and it will be a typical SA derby. We expect nothing less than a big arm-wrestle,” said De Bruin.

While the Lions scored six tries to three, they had to wait till the 60th minute to gain the upper hand after a red card to Brumbies lock Rory Arnold – after a dangerous tackle on Lions centurion Elton Jantjies – and a yellow to lock partner Sam Carter.

“I must say there were a lot of errors but we knew it would be an arm wrestle from the word go, they are in your faces and then you make more errors,” said De Bruin.

“So the more you are trying to play, the more mistakes creep in, but the big thing what we decided on was that our discipline needed to be better than theirs – and it paid off at the end of the day when we focused on our own job,” he said.

Former Lions coach Johan Ackermann was a surprise visitor in the company of his son Ruan and Springbok flank Jaco Kriel, both former Lions who have now joined him overseas.

“It was good to see him, I had a brief moment just after the game and said ‘hello you Gloucester boys’, but they were here and it was good to see them. The plan was to catch him later,” said De Bruin.