A tough day for the Springbok debutants

Rassie Erasmus handed first international caps to no less than 13 players against Wales but not a lot of them put up their hands. 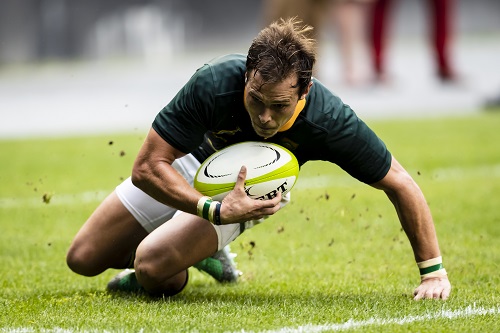 Ivan van Zyl of South Africa dives on the ball during the International match between South Africa and Wales at RFK Stadium on June 02, 2018 in Washington, United States of America. (Photo by Scott Taetsch/Gallo Images)

It was a harsh reality check for the 13 uncapped Springbok players who were introduced to Test match rugby against Wales in Washington DC at the weekend, according to scrumhalf Ivan van Zyl.

The Boks went down 22-20 after a late try by Wales, and a host of debutants learned an expensive lesson.

“We want to make up (for the defeat) against England and we take this loss very personally,” said Van Zyl, who earned his first cap.

“We never want to lose in a Bok jersey and it’s all about pride for us and representing our country, so we will work as hard as we can and do everything in our will and power to make sure we get the result.”

Trailing 14-3, Van Zyl said the half-time break had arrived at just the right time, with Bok team management taking a calm approach in an attempt to turn the game around.

“Just clear messages once again from the coaches and then we had a good start with the interception try, and that just gave us a little bit of confidence, knowing that we were back in the game,” he said.

“So we just had to focus on the basics, which went well, but unfortunately another kicking and exit error cost us the game.”

While some of the ‘young guys’ in the team had shown character, in the end their promising performances could not make up for the result.

“They capitalised just before half-time while we had three, four opportunities which we threw away, so that was the main thing,” Van Zyl said.

Van Zyl, who might have to stand back for Faf de Klerk in the starting team for the first Test against England at Ellis Park this weekend, said they could not use the humidity and damp conditions as an excuse for the defeat to Wales.

“We created opportunities, which was definitely positive, but in the end it was Test match rugby and you must make sure you use them.”