No room for complacency for Kitshoff … and the Boks

The flame-haired Springbok prop is earning rave reviews as the perfect foil for the steady Beast Mtawarira. 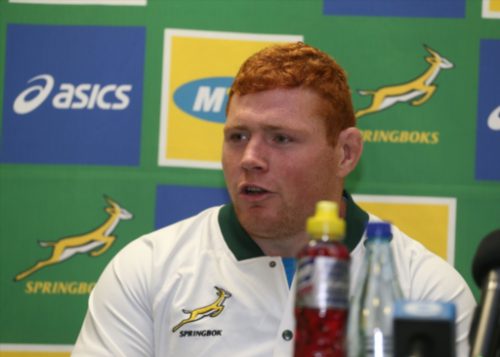 Steven Kitshoff believes the Springboks shouldn’t rest on their laurels after already winning the Test series going into Saturday’s third and final clash against England at Newlands.

The impressive prop, who has 25 caps, believes England will be smarting after losing the opening two encounters, especially given the manner the South African forwards have dominated theirs.

“England have a very good pack and they are also preparing well for us. I think this weekend is going to be another big set-piece battle,” said Kitshoff.

“We are very confident in our preparation, we just keep building as a pack and take every weekend at a time.”

The pack can certainly consider this outing as another opportunity to gel given the continuity in selection for the match.

Kitshoff has been superb in being a perfect foil for replacing Beast Mtawarira in the second half, gaining much plaudits for his all-round work rate.

Bok coach Rassie Erasmus believes the Stormers star’s performances have been so dynamic that he doesn’t even consider Kitshoff as a “second choice and at the moment; him and Beast are going toe to toe”.

“I’m very happy to get the opportunity every weekend. Rassie has put me on quite early in the second halves, so I just try to use the chances when I get them,” Kitshoff said.

The rampant form of the Springbok pack plus the absence of England’s key Vunipola brothers, prop Mako and No 8 Billy, will mean confidence is sky high but Kitshoff still believes the visitors are a threat.

“I think (Mako) Vunipola is a good rugby player and not just in the scrums, he is a good carrier and defender. Joe Marler brings a different aspect to the scrum,” he said.

“He is a bit more scrum focused and may be a bit better when it comes to set-piece play. I think it’s going to be a tough battle either way.”