The Lions coach remains calm as the franchise braces for a substantial exodus of leading players. 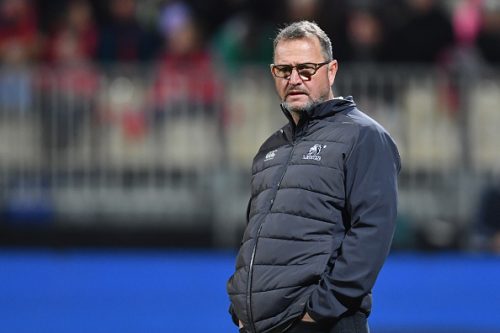 Head Coach Swys de Bruin of the Lions looks on prior to the Super Rugby Final match between the Crusaders and the Lions at AMI Stadium on August 4, 2018 in Christchurch, New Zealand. (Photo by Kai Schwoerer/Getty Images)

The future of Lions rugby is in safe hands despite the team going down in a third straight Super Rugby final, coach Swys de Bruin believes.

The Lions fell to a 37-18 defeat against the Crusaders in Christchurch on Saturday.

Lock Franco Mostert and prop Ruan Dreyer played their last games for the Joburg-based side before joining Gloucester, along with former captain Jaco Kriel, while centre Rohan Janse van Rensburg was set to join the Sale Sharks and prop Corne Fourie was packing for a move to Cape Town.

There was also uncertainty over the future of flyhalf Elton Jantjies.

“There’s always a season for two or three players to move on. The same thing happens in New Zealand,” De Bruin said.

“But we have a great youth system and the recruitment is good. The Under-19s and U-21s are winning and they are lifting trophies, so we are proud of what has been achieved at the union.”

While De Bruin admitted it would have been nice to win the Super Rugby title after three attempts, he lauded the squad for getting to the final.

“At one stage we were down and out, and we had a lot of injuries, but the guys who stood in played their part to get us into the final.

“So well done to the guys. I’m proud of them and I know they gave it everything.”

De Bruin said he had told the players in the change room that the score was one thing but character was another, and he could not ask for more than what they gave.

“It just shows you the quality we were up against: a very good Crusaders side who deserved to be the champions, right through the campaign.

“But it was a fantastic opportunity and a blessing to be there, to be part of this whole story.”

He was unsure whether the Crusaders’ tactics to counter-act their maul was legal or not.

“They just did it so well. We had no movement, even before we settled it went backwards and they were right in our faces.

“We play sport and at the end of the day we say ‘well done’ and we can’t wait to play against them again. That’s the ultimate challenge.”