The national coach lauds the Lions flyhalf as a player with 'character' and can be certain of his place in the Bok setup. 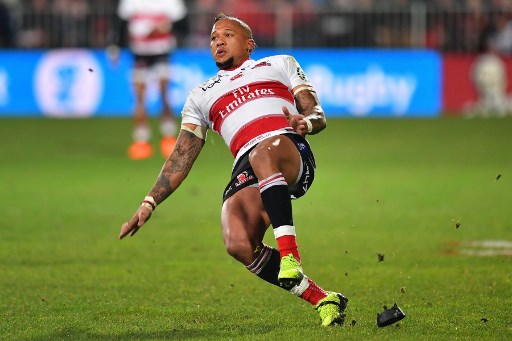 Lions' Elton Jantjies kicks a conversion during the Super Rugby final between the Canterbury Crusaders of New Zealand and the Golden Lions of South Africa at AMI Stadium in Christchurch on August 4, 2018. / AFP PHOTO / Marty MELVILLE

He once again drew stinging criticism for an inconsistent performance in last weekend’s Super Rugby final but Elton Jantjies shouldn’t be worried about his Springbok place.

National coach Rassie Erasmus on Monday gave the under-fire Lions flyhalf his full backing after selecting him as the official deputy in the No 1o jersey for the upcoming Rugby Championship.

“If Handre Pollard goes down now, there’s absolutely no doubt in my mind who’ll replace him,” he said.

“That man will be Elton. He’ll be the second choice and we’ll run with him.”

Jantjies’ ability is not in doubt but rather his ability to consistently keep up the high standards he’s capable of.

The 27-year-old attacked the gainline well in the second half of the final in Christchurch but also made vital errors such as carrying the ball over his own tryline and launching a poor up-and-under that led to the Crusaders’ second try.

“Whatever his hiccups are at those final hurdles, we must address them,” said Erasmus.

“It’s something we can help him out with.”

The Bok mentor also believes that Jantjies’ contribution towards guiding the Lions to three consecutive finals can’t count for nothing.

“To take your side into three Super Rugby finals as flyhalf suggests that you’re so close to realising something really great,” said Erasmus.

“It must be tough falling short so close to the line and then have people judging you just on that. Even a guy like (All Black pivot) Beauden Barrett played against the Crusaders the previous week and his Hurricanes got beaten soundly. That’s the margins involved. Some step up, some need that extra bit of help.”

Character is something Erasmus values highly in a player and he’s not averse to letting people know that Jantjies has that in abundance.

“I actually didn’t know Elton personally before I started coaching him this year. I’m not here to defend a player’s character but some of the best players to work with are those that always analyse and try to become better. Those guys that stay later to practice that little bit extra. That’s him.”