Springboks don’t want to be ‘selfish’ with overseas-based stars

Rassie Erasmus has 'rugby law' on his side in terms of the availability of men like Willie le Roux, Faf de Klerk and Francois Louw but doesn't want to abuse it. 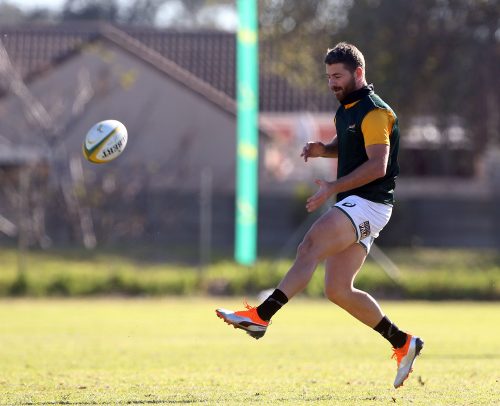 Rassie Erasmus doesn’t want to be “selfish” when it comes to the use of the overseas-based players in his current Springbok squad.

The build-up to Saturday’s Rugby Championship opener against Argentina in Durban has been characterised by speculation over whether fullback Willie le Roux, scrumhalf Faf de Klerk and flanker Francois Louw will be available for the whole of the campaign.

ALSO READ: Five Springboks to keep an eye on

And, to be fair, when Le Roux and De Klerk signed, there weren’t many indications that Erasmus’ predecessor, Allister Coetzee, would use them.

The current plan is to use them until the end of the Springboks’ Australasian leg of the tournament.

“We want to be reasonable,” said Erasmus.

“There aren’t any arrangements yet but there is an understanding with the clubs. In the first four games, we’ll try to use Francois and the others as much as possible. I want guys like Marco (van Staden) and Cyle (Brink) to learn as much from him as guys like Aphiwe (Dyantyi) and S’bu (Nkosi) learned from Willie or Ivan (van Zyl) and Embrose (Papier) from Faf”

The Bok mentor actually does have international rugby “law” on his side in terms of Regulation 9, the rule that ensures clubs must make players available during international windows.

But forcing Le Roux and co to stay risks straining relationships on all fronts.

“We don’t want to be selfish, and we want to grow this team with the World Cup in mind,” said Erasmus.

“What will we do if guys like Duane and Faf are injured? We have to look at a few of the other guys in the context of next year.”

However, injury crises could lead to the foreign legion staying on longer.

“We will handle it on a case-by-case basis There’s a chance those players will go back after the Australasian tour. A good chance. But if we have a lot of injuries and are under pressure after a few bad results, we may keep them,” said Erasmus.