Rassie Erasmus' underwhelming start as national coach means winning is now the No 1 priority for the rest of the Rugby Championship. 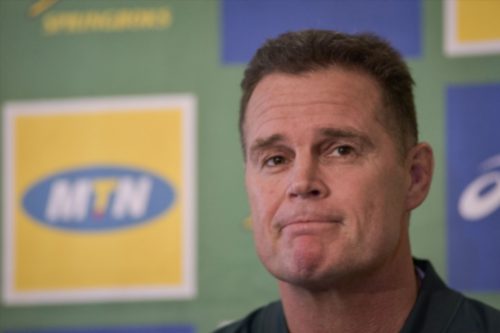 The Springboks have their backs against the wall in their Rugby Championship challenge against the Wallabies in Brisbane this weekend, national coach Rassie Erasmus has conceded.

Erasmus admitted ahead of their departure on Saturday night that a win this weekend would go a long way in healing the pain caused by the below-par 32-19 loss to Argentina in Mendoza nine days ago.

ALSO READ: Rassie doesn’t want to coach the Bulls too!

“When you lose there is more pressure,” said Erasmus.

“We want to build, but everybody always says we have to win, and that’s the name of the game.

“Every game you lose, there is pressure. It doesn’t matter who it is against, even if it is against the All Blacks by one point, the next week the pressure is on.

“We will make a few changes, but we will experiment a lot less that we initially anticipated.”

The players were not immune to the wave of criticism they faced, and Erasmus said they understood that.

“I’m sure the effort on Saturday will show that,” he said.

“Australia might be in an even worse position than us. They had two games, obviously against the world champions, and they gave them a proper hiding, so they will be desperate and that will make them dangerous.”

Erasmus admitted his team would be equally desperate after losing against the Pumas.

“It will be two teams trying their best to rectify the mistakes from their last Tests, and with them playing at home it will make it tougher for us,” he said.

“But we are ready and up for the challenge, and we know the only way getting the Pumas defeat out of our minds will be by winning in Brisbane.”

Erasmus said he had been thinking about the Bok loose trio, as well as the midfield combination.

“We are trying a few things there. It went well in Durban but not so well in Mendoza.

“It’s not just the back row (or midfield) but in various positions where the team were much less accurate and effective compared to Durban.

“Overall it’s just a team thing we must sort out but I think the loose trio will go far.”