Willie celebrates his half-century as Boks opt for experience

National coach Rassie Erasmus places a premium on wisdom against the All Blacks at Loftus. 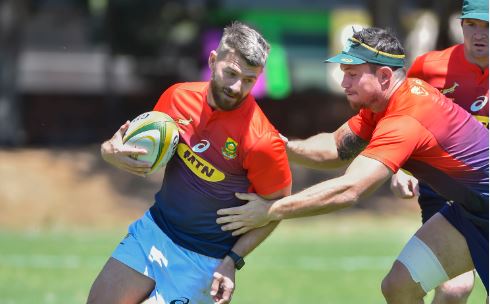 Willie le Roux will have the honour of playing his 50th Test against the best team in the world at Loftus on Saturday.

The mercurial fullback wasn’t actually slated to play in this weekend’s game due to club commitments but following a plea from the player himself, he’s present in the capital.

The 29-year-old playmaker has been an instrumental part of the Boks’ season and has repaid the faith invested in him, despite some ups and downs.

“Willie has grown immensely since making his debut five years ago and his calm influence at the back, as well as his experience, will be vital on Saturday. He deserves this accolade,” said coach Rassie Erasmus.

The national mentor has placed a premium on experience for the match against the All Blacks.

Erasmus noted how both the selections of Damian de Allende at 12 and Francois Louw at No 8 reflect that ideal.

Saracens star Vincent Koch is also included on the bench in the vital tighthead position.

“Vincent has learnt a lot from playing in Northern Hemisphere conditions and I am sure he is very keen to pull on that Green-and-Gold jersey again. He has a burning desire to play for the Springboks and I am delighted for him as we continue to build our squad depth,” said Erasmus