We now know that Siya Kolisi has found the perfect balance between form and leadership but amidst all the positives, there's still a case for Jan Serfontein to return. 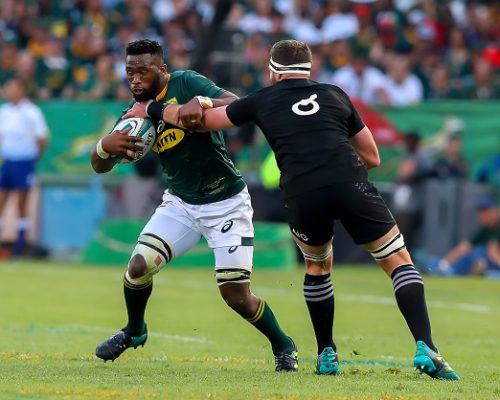 Captain against captain, Siya Kolisi (c) of the MTN Springboks tries to get past Kieran Read (c) of the Investec All Blacks during the Rugby Championship match between South Africa and New Zealand at Loftus Versfeld on October 06, 2018 in Pretoria, South Africa. (Photo by Gordon Arons/Gallo Images)

In the end, a 50% win record in the Rugby Championship (three from six) doesn’t look impressive but the Springboks truly did make tangible progress in 2018.

The three wins are more than any of the previous three campaigns, while there were no 57-15 or 57-0 blow-outs against the All Blacks.

Here are the things we learned from an encouraging two months for the Green-and-Gold.

This defensive system has “World Cup success” written all over it

The Boks’ defence coach, Jacques Nienaber, had informally stated at the beginning of the season that the side would probably take “about ten” matches to get used to the new system.

By the eighth – in Wellington – Rassie Erasmus’ troops seemed to understand it already.

South Africa’s defence is modern and extremely relevant, one where their behemoth forwards can engulf spooked opposition ball-carriers.

The fact that the Boks still conceded 21 tries attests to the reality that they’re still a work in progress though.

Yet it must also be taken into account that this system will lead to skewed tackle statistics, as one does miss a bit more because of the rush pattern.

Thankfully, there’s invariably another guy behind the offender to bail him out.

World Cups are won on defence and while the Boks probably won’t win in 2019, they’ll get far with it.

Siya Kolisi has matured into a magnificent international player

Erasmus is a realist and that’s why he’s kept expectations around his captain low.

It did take a while for Kolisi to find the balance between influential player – like he was in 2017 – and solid skipper.

Never did the 27-year-old crumble under pressure and, laudably, improved with every outing.

By the time the All Blacks came to Pretoria, coach Steve Hansen insisted that one of the best players in the Bok team was their captain.

Kolisi proved him right with a brilliant all-round showing at Loftus, against the best team in the world.

The Boks are far more clinical than you think

Stats wise, South Africa made the least running metres of the four teams in the campaign.

At face value, that suggests a team not creating a lot of play themselves.

That’s partly explained by them making the most tackles in the tournament.

But then one realises they scored the second most points as well as the second most tries, pointing to the welcome fact that the Boks are embracing their traditional strength – counterattacking rugby.

Loftus showcased that they can control large parts of a match too but all their biggest successes in the past were based on ruthlessly scoring every point on offer and punishing mistakes.

This template has made a return … and it’s good news.

Damian and Jesse are fine but…

One can probably safely say now that Damian de Allende and Jesse Kriel as the Boks’ first-choice centre pairing, purely because they just seem to combine well.

However, it’s unlikely that they can elevate this team in playmaking terms, but that’s not their fault.

He’s the man who pulls the strings and doesn’t receive too much additional input from Handre Pollard, who’s probably still trying to regain his own form before letting the creative juices flow.

Either way, without De Klerk for the European tour (as is being reported), the Boks could be caught in no man’s land in terms of decision-making on the field.

That’s why a bolter at inside centre is so important … and De Allende is not that guy.

South Africa need Jan Serfontein, such a key player in 2017, back to fill that playmaking void.