It was far from a perfect weekend for Neil Powell's troops, but the positive end to this weekend's tournament could be a good launchpad for the season. 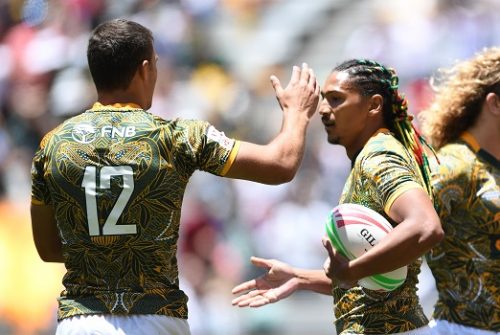 A bronze medal in the Cape Town Sevens can hardly be classified as a disgrace for the Blitzboks, especially when it’s done at the expense of the All Blacks.

However, in the aftermath of Sunday night’s narrow 10-5 victory over the old enemy, something became clear: maybe expectations for this year’s group is just a tad too high.

It’s understandable that the local rugby public have become accustomed to South Africa’s success in the sevens format.

After all, they’ve been overall champions for two years in a row.

But the first two events of this season’s campaign have made it clear that the Blitzboks are in for a transitional season.

That doesn’t mean it will be a bad one – third place at home attests to that – but Neil Powell’s newish group of players will take time to find their feet.

The defeats to New Zealand in Saturday’s final pool match (21-26) and an agonising semifinal reverse to Fiji (12-17) illustrated that South Africa are far from the slick outfit that has recently dominated the circuit.

Perhaps the biggest lesson has been that the Blitzboks quickly need to regain their accuracy in the “unfashionable” aspects of the sevens format – defence and the breakdown.

For years Powell’s teams have prided themselves on that.

Yet far too many first-time tackles were missed at the weekend and, frustratingly, there seems to be a problem adapting to World Rugby’s new, extremely strict high tackle law.

Numerous penalties were conceded due to tackles straying above the threshold and Shakes Soyizwapi’s yellow card in the Cup quarterfinal against Scotland (a game won 21-12) put his team under pressure.

Two of Fiji’s tries in the semi came down to inadequate tackling.

Then there was also the lack of composure at vital moments in certain matches.

The Blitzboks missed out on a chance to eliminate New Zealand at the pool stage for the first time in their history, but conceded two tries essentially after extra time.

That winning score came when the host nation inexplicably dropped a kick-off.

However, Sunday’s spirited end suggests those lessons might be learned soon.