Why Robert du Preez might be more potent than people think

Rugby in England isn't quite the same as rugby in South Africa. But that's exactly why the Sharks pivot has new strings to his bow. 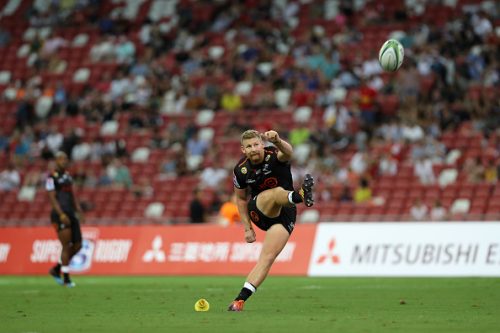 Robert du Preez of Sharks in action during the Super Rugby match between Sunwolves and Sharks at Singapore National Stadium on February 16, 2019 in Singapore. (Photo by Lionel Ng/Getty Images)

Robert du Preez jnr doesn’t immediately strike you as the type of flyhalf that cuts through a defence like a hot knife through butter.

The Sharks pivot seems like a string-puller who’s more content playing a role in the background and dictating with his educated boot, a perception created by the fact that he scored a mammoth 215 points in last year’s Super Rugby campaign.

Last weekend, Du Preez delivered yet another flawless display from the kicking tee against the Sunwolves, further entrenching that reputation.

Yet 2019 might be the year where the 25-year-old shows a couple of new strings to his bow, added while he was on duty for English cub Sale in the off-season.

“I learnt a lot in the way the Northern Hemisphere teams play, how they attack teams and unpick defences,” said Du Preez.

It’s indeed a tantalising thought for the Sharks, who are hoping to play a more attacking brand of rugby and can, theoretically, exploit Super Rugby’s more relaxed defensive patterns.

Du Preez’s stint in Salford does mean he didn’t rest much, but insists he feels “really refreshed” and now understands why an increasing number of local players are taking up short-term contracts in England before coming back for the new season.

“I really enjoyed it. I’m always a guy who’s keen to try new things. If it were up to me, I’d encourage every player to do so. It broadens your horizons. You learn different things from new people,” he said.

“Sometimes you’re even learning the exact same things that you already know, but just hearing it from a new voice makes you listen again.”

Du Preez’s refined attacking skills will face a big early test against the Blues in Durban on Saturday.

He and the midfield pair of Andre Esterhuizen and Lukhanyo Am will also need to contain the wily, experienced duo of Ma’a Nonu and Sonny Bill Williams.

“I’ve never played against Ma’a, but he’s an experienced campaigner. I think we need to focus on ourselves instead of them. We’ve got more than enough in our arsenal,” said Du Preez.