It took a full 86 minutes to get there, but Robbie Fleck's troops finally break down the Lions' defence in a poor game. 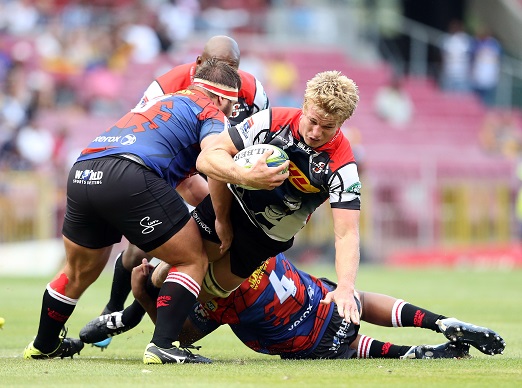 Pieter-Steph du Toit of the Stormers during the Super Rugby match between DHL Stormers and Emirates Lions at DHL Newlands Stadium on February 23, 2019 in Cape Town, South Africa. (Photo by Carl Fourie/Gallo Images)

Attrition was the buzzword as the Stormers scored a dramatic last-minute 19-17 win in a tense, hugely physical but error-ridden Super Rugby win over a tiring Lions side at Newlands on Saturday.

Reserve scrumhalf Hershel Jantjies scored the hosts’ only try in the 86th minute as referee Egon Seconds awarded one penalty after the other.

While the 22-year-old showed excellent awareness in bursting through the middle from the final scrum, Lions fans and neutrals will probably bemoan some questionable officiating in the 77th minute, when arbiter Egon Seconds and his assistant seemingly ignored a legitimate steal by Malcolm Marx.

It was tough on the men from Ellis Park, who had flank Marnus Schoeman yellow-carded with four minutes  of regulation time left and managed to keep the Capetonians out long enough for him to actually return to the field.

Nonetheless, the Stormers deserve praise for showing guts in the face of adversity, but the quality of rugby on show in general was very disappointing.

While a superb display by Marx put “pressure” on him, Lions flanker Kwagga Smith was his industrial self and was everywhere, showcasing his incredibly high work rate. Apart from scoring the Lions first try, he was a handful on the ground, slowing Stormers ball and generally creating havoc at the breakdowns.