The legendary scrumhalf has the utmost faith in the national team's ability to be a top dog. But do the players and coaches? 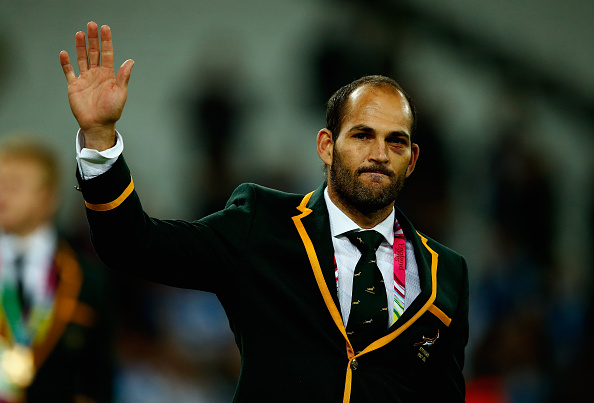 Fourie Du Preez of South Africa waves to the crowd after the 2015 Rugby World Cup Bronze Final match between South Africa and Argentina at the Olympic Stadium on October 30, 2015 in London, United Kingdom. (Photo by Mike Hewitt/Getty Images)

Fourie du Preez has always been a man of few words, predominantly because he doesn’t deal in hypothetical.

Don’t ask him who’ll win the World Cup this year.

Don’t ask him if Japan’s humidity in September will suit the Springboks’ practical game-plan at the showpiece.

He doesn’t see the point of trying to answer.

But the legendary Springbok scrumhalf – hailed by many as one of the greatest ever to wear a No 9 jersey – is passionate about one thing: the belief that South Africa should consistently be beating the All Blacks.

There’s a reason for that.

No serious Bok supporter will underestimate the magnitude of such an achievement.

“Last year at Loftus, the Boks – had they been mentally tougher – shouldn’t have just won that game, we should’ve beaten them by 30 points,” said Du Preez, referring to the Rugby Championship outing where the hosts blew a 30-13 lead to lose by two points.

“Over the last few years, we’ve had this thing in our rugby where we put the All Blacks on a pedestal and don’t believe we can beat them comfortably. Sure, we were a bit lucky to beat them in Wellington, but at least we were in a position to beat them and we managed to close that one out.

“Why shouldn’t we believe this year?”

Belief is going to be particularly important for Rassie Erasmus’ charges in 2019 given that they begin their World Cup campaign against their greatest foe in Yokohama.

And by all accounts last year’s showings should be more than enough evidence of the Boks’ ability to topple the defending champions.

Du Preez, however, has resigned himself to the fact South African rugby will be back to doing soul-searching in the aftermath.

“We’re honestly our own worst enemies when it comes to the All Blacks,” said the 36-year-old following a promotional engagement for the Japanese Embassy.

“The problem is, whenever we lose to them and lose narrowly, we end up back at zero. I’ll use the 2015 World Cup as an example.

“In the semifinal against them, we lost by two points (18-20) and should’ve won. South Africa started at zero the following year and that explains why we were so bad in 2016 and 2017. Why would you start at zero again? Why not start from a two-point loss in your previous meeting, become 10% better and actually beat the All Blacks every year?

“Why start over every time? To me, it’s clueless. Next year, we’re going to stand here again … at zero.”