But centre Lukhanyo Am believes the World Cup remains the biggest objective in 2019. 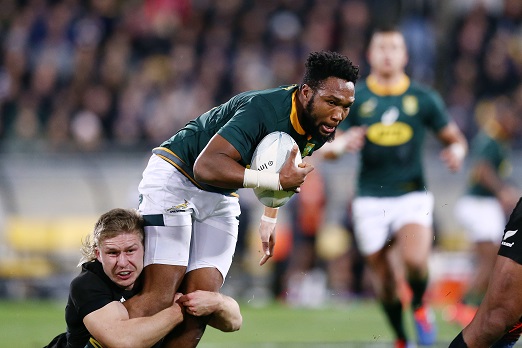 Lukhanyo Am of the Springboks is tackled by Jack Goodhue of the All Blacks during the 2019 Rugby Championship Test Match between New Zealand and South Africa at Westpac Stadium on July 27, 2019 in Wellington, New Zealand. (Photo by Anthony Au-Yeung/Getty Images)

This weekend’s final Rugby Championship Test against Argentina in Salta provides the Springboks the perfect opportunity to secure a rare win at the competition in a World Cup year, believes centre Lukhanyo Am.

The Boks have never won the Championship and last won the southern hemisphere competition back in 2009 when it was still known as the Tri-Nations.

“Playing Argentina at home is always a tough game and we have prepared from what we have seen of them in their previous two Tests, so we are looking forward to the game,” said Am.

“It’s a great opportunity for us to win the Championship but we don’t want to make too much of that; it’s another Test that will help with the building of the team. The big picture is the World Cup.”

Am is expected to be named alongside Damian de Allende today when the team is announced, but coach Rassie Erasmus could spring surprises after saying he would name his strongest side.

“The Test is more important in a World Cup year because you get more time to prepare for the tournament and that’s what we have been focusing on,” said Am.

He said there’s pressure in every Test they play, but going into this game they know what chance they have in this match on winning the competition.

“But if there is pressure it is good pressure and the Argentina side is quite a physical side and link up well between forwards and backs, so it will be an exciting game for us to be involved in,” he said.

“There are some good strike runners in the Argentina side but then it’s also not a case of direct opposition and we will direct our defence as a collective.”

Revealed: Springbok squad to play three Tests in UK
9 hours ago
9 hours ago

Revealed: Springbok squad to play three Tests in UK
9 hours ago
9 hours ago