Lions were one minute away from unlikely glory

At least that's what coach Ivan van Rooyen believes as the Cheetahs give Franco Smith a great send-off. 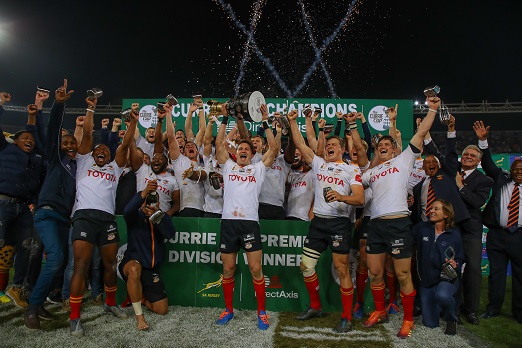 If the game had been one minute longer, they could have stunned their hosts and snatched the win in the Currie Cup final on Saturday, according to Golden Lions coach Ivan van Rooyen.

Despite scoring 21 unanswered points in the last 10 minutes, the visitors were left with too much to do after the Cheetahs had built a 31-7 half-time lead, and they ultimately lost just 31-28.

“I think we can talk with great pride about the guys’ character. They’re young guys who want to play,” Van Rooyen said.

“I think at the beginning we looked more at what our opponents were doing, but I’m sure it was an attractive game for the fans.”

Though he insisted they had not been intimidated by the halftime deficit, Van Rooyen admitted a try scored by Cheetahs lock Walt Steenkamp just before the break had ultimately cost them the title.

“It gave them the cushion which eventually proved the difference,” he said.

“The competition created energy and opportunity as there’s not a lot of other opportunities. I think it worked this year.”

Lions captain Ross Cronje said the clash had been intense and was played at a fast pace.

“I think the Cheetahs did well to keep our ball down a bit, especially in the first half, and that was pretty much the difference,” Cronje said.

“Tactically in the first half they were just the better team, but I’m still proud of the boys for coming back in the end there.

“It’s never nice having a loss, but it happens.”

Cronje believed the Cheetahs had the necessary firepower to do well in the Pro14 competition starting later this month.

“They showed it with their mauling and stopping our maul. That’s where they were very strong and that was one of the differences between the sides,” he said.

“With Northern Hemisphere rugby that is very important, and their tactical play and playmakers were also very good.” With the Cheetahs lifting the Currie Cup title in his final game in charge at the weekend, triumphant coach Franco Smith lauded his team’s ability to bounce back.

After escaping a promotion-relegation match last year, the Cheetahs earned a 31-28 win over the Golden Lions in the cup battle at Free State Stadium.

They had to endure a few nervous moments, however, after the visitors staged a comeback late in the game, with each team eventually scoring four tries.

“We came from a promotion-relegation

game last year and we worked all the way back, and this was an important brick in the wall we are building again,” said Smith, who secured his second Currie Cup crown before heading to Italy.

“Last year we started over with a lot of guys leaving, so we set ourselves objectives and said it was going to take time.”

The Cheetahs were all over the Lions in the first half, in a game played at a frenetic pace, and they held the Lions with a tenacious defensive effort when it was required.

“A great win in the end against a Lions side who threw everything at us,” Smith said.

Having been forced to fight back in their previous two matches against Western Province and the Sharks, Smith admitted they had started defending their lead in the final.

“The one trend through the Western Province, Sharks and the final games was that the team didn’t want to disappoint,” he said.

Many people outside the squad environment had been impatient regarding their progress, so this was a good stepping-stone for the Cheetahs.

“Everybody played a role, from the trainers to the conditioning guys, all coaches involved, management, and even the way the Cheetahs marketing team went about it. The whole campaign was excellent,” Smith said.

“And top of this pile are the players. The way they reacted to the challenge and what we wanted was laid out there and the response was exceptional.”