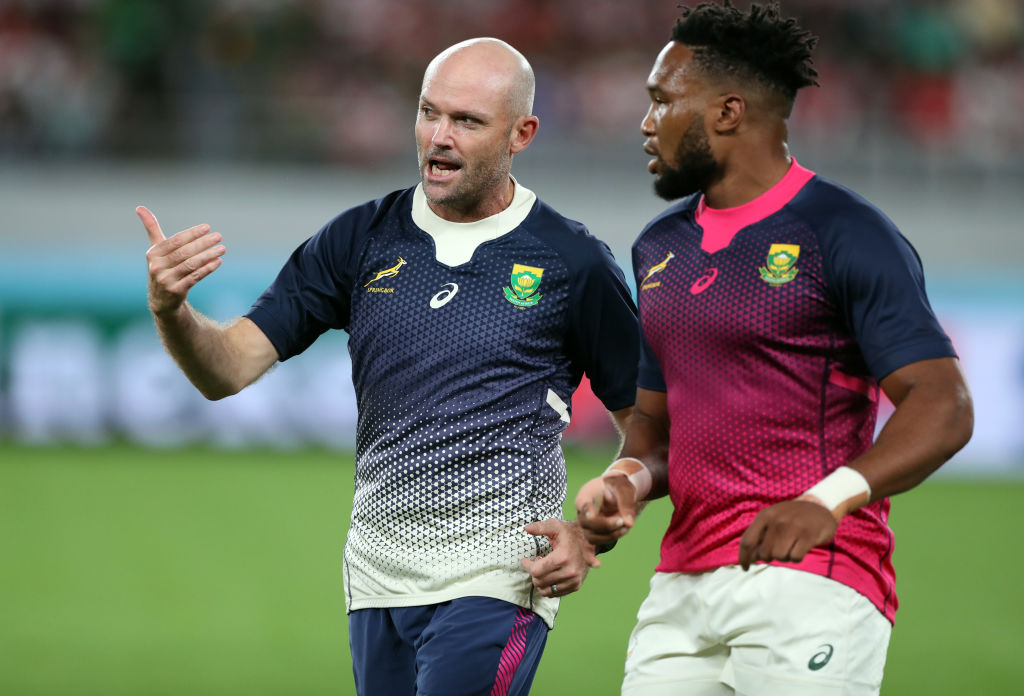 Jacques Nienaber of South Africa with Lukhanyo Am of South Africa during the Rugby World Cup 2019 Quarter Final match between Japan and South Africa at Tokyo Stadium on October 20, 2019 in Tokyo, Japan. (Photo by Steve Haag/Gallo Images/Getty Images)

It wasn’t a particularly well-kept secret, but SA Rugby on Friday confirmed Jacques Nienaber as the new Springbok coach.

The national team’s defence guru takes over from Rassie Erasmus, who is now more focused on his original role of director of rugby after agreeing in 2018 to double up as the interim head coach.

He had indicated previously that he didn’t want to continue in that capacity even before South Africa won the World Cup.

47-year-old Nienaber, a qualified physiotherapist who gradually expanded his professional horizons and is now regarded as one of the leading minds on specialist defensive coaching, has never previously held a role of this nature but is intimately familiar with the Springboks structure.

As a confidante of Erasmus, it’s thought that Nienaber will readily continue to implement his line manager’s vision for the team.

He’ll be assisted by former Kings mentor Deon Davids, while Bulls scrum specialist Daan Human has been roped in to fill the void left by Matt Proudfoot, who has joined England.

Mzwandile Stick stays on as assistant coach, while Irishman Felix Jones’ temporary gig at the World Cup becomes a permanent one.