Bok stars Am, Mapimpi an ‘inspiration’ for the next generation

The World Cup stars scored both of the Boks' tries in the second Test against the British and Irish Lions. 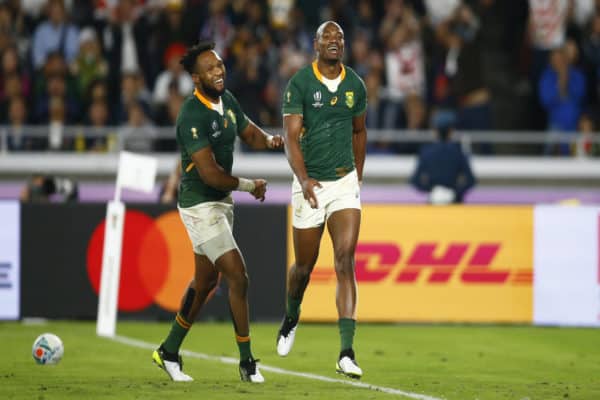 Lukhanyo Am and Makazole Mapimpi celebrate the latter's try in the World Cup final in 2019. Picture: Steve Haag/Gallo Images

Springbok assistant coach Deon Davids says he hopes the success of star players Lukhanyo Am and Makazole Mapimpi will inspire younger players to also chase after their goals and dreams.

The Springbok heroes from Japan, who combined so brilliantly for the Boks’ first try against England in the World Cup final, were the two try-scorers in the second Test against the British and Irish Lions in Cape Town last Saturday.

The five-pointers by Mapimpi – after latching onto a crossfield kick by Handre Pollard and powering in – and Am – who got on the end of a stab-through kick by Faf de Klerk – helped the Boks down the Lions 27-9 and level the series.

Both Mapimpi (31) and Am (27) started their rugby careers in the Eastern Cape and were coached by Davids at the Southern Kings in 2017 and 2016 respectively.

“It’s satisfying to see players who started there progress so far and reach their dreams,” Davids said earlier this week about the star backline players.

“I’m just glad I could play a small role in them fulfilling their potential.

“At the end of the day it is down to a player’s hard work and desire. It is about believing in yourself and I hope their example serves as inspiration to others… if you work hard you can achieve your goals.”

Davids also paid tribute to director of rugby Rassie Erasmus and coach Jacques Nienaber for creating an environment in the Bok squad for players to reach their full potential, and to grow as humans and not just as sportsmen.

“And the director’s (Erasmus) drive for players to be the best they can be is there all the time; he will go the extra mile to ensure the players perform to the best of their ability.”

The third and final Test between the Boks and Lions takes place at Cape Town Stadium at 6pm on Saturday.