Bok ‘Bomb Squad’ tactic under microscope against Wallabies, All Blacks

It will always be a gamble playing with just two backs replacements - one of them a specialist scrumhalf, the other a versatile player. 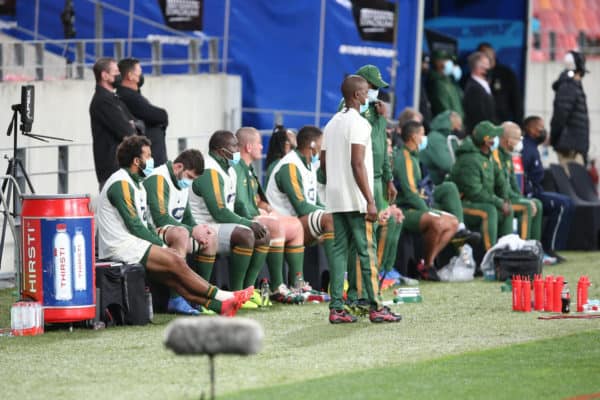 The Springboks' tactic of using six forwards and two backs on the replacements bench is under the microscope in Australasia. Picture: Richard Huggard/Gallo Images

The Springboks’ maverick approach to both game-plan and selection has certainly served them well since their third match in the 2019 World Cup, but this Saturday’s Rugby Championship Test against Australia would be only the second time that it has been used against one of the Australasian sides.

South Africa lost 13-23 to New Zealand in their World Cup opener, using a traditional 5-3 split between forwards and backs on the bench and struggling to get much momentum in the game. An easy 57-3 win over Namibia followed, but their next match, against Italy, was a potential knockout blow.

That was when the 6-2 bench was first used and the Springboks really started to use a kicking game in order to gain momentum.

Their execution of the plan was poor last weekend against Australia and it is still early days when it comes to deciding whether the “Bomb Squad” replacements tactic will work against teams like the Wallabies and especially the All Blacks next weekend, sides that are used to playing at high intensity.

“We believe in the 6-2 split, it has worked for us and there’s no need to panic when it comes to selection,” assistant coach Mzwandile Stick said this week after the Gold Coast defeat.

For some though, the risks in the strategy are too great when it comes to well-matched opposition who are likely to keep the result to within a single score. There was heartbreak last weekend for the Springboks when flyhalf Handre Pollard had an off-day with the boot and his replacement, Damian Willemse, who is not a frontline kicker for the Stormers, missed the Springboks’ last kick at goal, a 73rd-minute conversion.

There is little respite for Pollard, such a key performer for the Springboks and very seldom rested.

ALSO READ: Kolisi: ‘Boks will throw everything into this Wallabies game’

But a 6-2 bench makes it hard for Jacques Nienaber to choose a specialist goal-kicking flyhalf among the replacements because both Morne Steyn and Elton Jantjies are not going to be able to provide real cover for any other backline position.

“Week in and week out, there is always massive debate about our selection and not just this week,” Stick said.

“It’s nothing new. Handre did not have his best game last week, but we did not lose because of that, it was mostly down to our discipline.

“He has been brilliant for us since 2018, but sometimes a star will have an off-day, he’s only human. Damian is a brilliant player and is still getting better. We did not lose because of kicks at poles.”