Springbok coach Jacques Nienaber was philosophical about the heartbreaking loss. 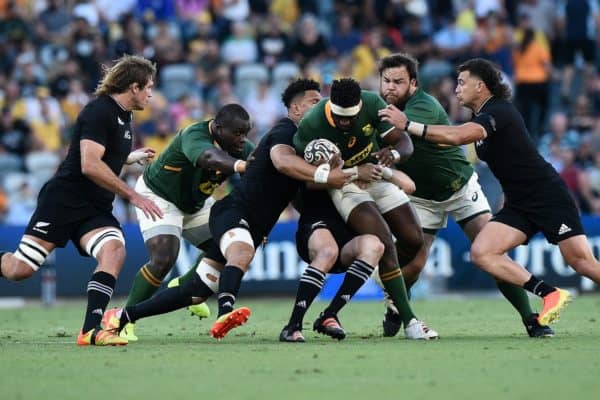 Springbok captain Siya Kolisi is tackled during the Test against the All Blacks on Saturday. Picture: Getty Images

For the third time this year the Springboks were involved in a Test match that was decided by a penalty at the death as they went down 19-17 to the All Blacks in Townsville on Saturday, with coach Jacques Nienaber describing it as “swings and roundabouts”.

New Zealand fullback Jordie Barrett slotted a brilliant, angled, long-range penalty to deny the Springboks, who had enough front-foot ball in the closing stages to shut the All Blacks out, but instead tended to kick that possession away.

South Africa won the recent series against the British and Irish Lions through Morne Steyn’s fairytale penalty, but were then beaten two weeks ago by the Wallabies through a last-ditch kick by Quade Cooper, another comeback story for the ages.

Nienaber was philosophical about the heartbreaking loss that consigned the world champions to a third successive defeat and handed the Rugby Championship title to New Zealand.

“It was a proper Test match, as you’d expect from No 1 versus No 2, and there were small margins,” Nienaber said.

“We each have our own DNA, but it is always physical and comes down to a couple of points. That’s the contest, it’s that tight and we expected that.

“Our game-plan worked, we had opportunities, and it went down to the wire, decided by a call here or a bounce of the ball there.

“Obviously we are hurting because we could have pulled the result out of the game – we were in position to do it – but I thought it was an excellent effort and we deserved victory.”

While the Springboks brought their old physicality, sheer mongrel and set-piece brilliance to the contest, the criticisms that they overdo the kicking game and are poor with ball in hand will return as they wasted front-foot ball when they were still in the lead in the closing stages by kicking it away.

Bizarrely, up-and-unders were twice launched from the All Blacks’ 22, South Africa losing the resulting 50/50 contests when they had been in control of possession.

Nienaber, however, defended the decision-making of his halfbacks.

“We always say we must attack space, but we had 14 players in front of us in the line and only one at the back, so unfortunately there was not a lot of space,” he said.

“We want to create a one-on-one and you can do that with a passing game or with a kick. If you can create space through the air, or by running or passing, then you must attack there.

“If we had won this match then we wouldn’t be having these questions, but we could have probably shown more composure at the back end of the game.”

Salmaan Moerat on his neck injury, his return to play and his Bok chance
20 hours ago
20 hours ago

Salmaan Moerat on his neck injury, his return to play and his Bok chance
20 hours ago
20 hours ago