The team’s sport psychologist, Henning Gericke, has spent the past few days reminding the players about the philosophy of the squad. 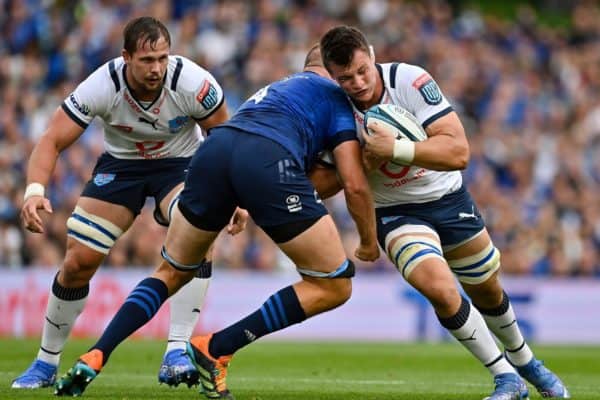 Elrigh Louw of the Bulls is tackled by Ross Molony of Leinster during the United Rugby Championship match in Dublin last week. Picture: Brendan Moran/Getty Images

The reminder of everything the Bulls need to stay focused on in their time up north has been right there in their hands.

They’ve seen it at every training session they’ve had in the rain and cold these past few days, as they prepare for their next United Rugby Championship match against Connacht on Friday.

Every time they’ve picked up a rugby ball this week, it’s looked them right in the face.

The United Rugby Championship. The very name of the competition represents the philosophy of this team on their four-week tour.

It’s something the team’s sport psychologist, Henning Gericke, has spent the past few days reminding the players about, breaking down the name of the competition and giving it tangible meaning in the minds of the players as they keep making the mental shift required for this new rugby environment.

ALSO READ: Bulls’ Botha on the Leinster loss and what to expect of Connacht

“We start with the word ‘united’. That’s a reminder for us to stay united as a group, and to keep those connections we have as a team,” Gericke said.

“When you’re on tour and playing away from home in a new environment, that’s a challenge, so it’s a reminder that the unity we have as a group is very important and special.

“For the word ‘rugby’, the ‘R’ also represents the ‘right mindset. We need to have the right mindset to keep believing in our process.

“Just because we had one defeat against Leinster doesn’t mean we’re going to suddenly start doing everything differently. We stick to our process and we believe in it.

“And then for the word ‘championship’, the ‘C’ also represents ‘change’. This competition is a change for us, and we need to be able to adapt as a team.

“That’s the most important for us, to be able to change according to the environment of different weather, playing in front of different crowds and even crowds at all which these players haven’t had at home, and then of course the different refereeing. We need to embrace the change.”

After the defeat against Leinster in their opening match last week, Gericke worked hard with the players to help them process that loss within the right context.

He even encouraged them to each take the time and go for a walk in a nearby forest, and to mentally process that game individually.

“This is not about making a big mental change as a team just because we lost that first game. It’s about just being mindful to keep our general focus that we had coming into this tour,” he said.

“We’re not looking to make wholesale changes. It’s about the ability to make certain key changes that will make us better and smarter rugby players.

“That’s the growth journey we’re on at the moment with this team.”