The return to action of several British and Irish Lions players strengthens the opposition from this week. 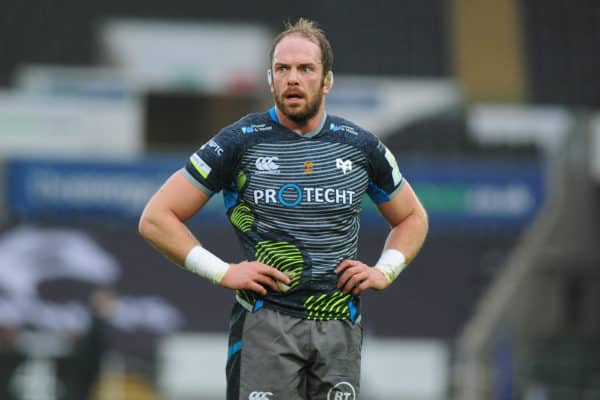 British and Irish Lions captain Alun Wyn Jones should be back for Ospreys against the Sharks on Friday. Picture: Athena Pictures/Getty Images

South African franchises have struggled in the opening two rounds of the United Rugby Championship, and round three offers them different challenges yet again.

Here is what to expect from their opposition in round three of the championship.

Where and when: Swansea stadium, Swansea. Kick-off 8.35pm Friday

Swansea has been a place where South African players have traditionally enjoyed playing, with the Springboks putting up a massive 78-7 win on their 1994 tour there and most recently with both the Cheetahs and Southern Kings winning their last games there in November 2019.

But this year has been a different start for Toby Booth’s side, as they kicked off their campaign with two derby wins against the Dragons and Cardiff and are on a high right now.

The Sharks showed flashes of form against Glasgow last weekend but have another tough encounter coming up, especially as Ospreys will be looking for a South African scalp.

Local fans will remember former Western Province, Cheetahs and Kings prop Tom Botha from his days in South Africa, while the Ospreys also boast the likes of British and Irish Lions captain Alun-Wyn Jones and George North on their books.

New Zealand born Gareth Anscombe put the Welsh national team on notice last week with a match-winning performance after returning from two years out of the game. The Ospreys are likely to be without Michael Collins and Bradley Davies but could see the return of Wyn Jones if selected.

Where and when: Scotstoun Stadium, Glasgow. Kick-off 4.05pm Saturday.

The Lions will be the second South African team to face European opposition on a 4G pitch after the Sharks struggled last weekend, and have never faced Scottish opposition before.

Glasgow will head into the game confident as they have won their last five games on the pitch and have won seven games on the trot against South African opposition at home, with their only losses, in the competition’s former incarnation as the PRO14, being in South Africa.

They have suffered only one defeat in their last six matches across the Rainbow Cup and URC and showed last weekend against the Sharks that they have the offload game and pace to match any team in the competition.

With South Africa-born star Kyle Steyn leading the way, they are formidable opposition for any other side in the competition.

Where and when: DAM Health Stadium, Edinburgh. Kick-off 6.15pm Saturday

Edinburgh’s run under new coach Mike Blair received a heart-breaking setback last weekend as Benetton pipped them with a last minute penalty to win a tense fixture in Treviso.

Now back at home in front of their own fans at their new stadium, which was opened this year, Edinburgh will be looking for a lot better form after winning only one of their last six matches across the URC and Rainbow Cup.

They have won their only fixture at the new stadium, closely beating Scarlets and are a team in search of redemption. But they will take heart from the fact they have played seven games against South African opposition and have not lost to them in Edinburgh, with their two losses being on the road.

Edinburgh are also a home away from home for a bunch of South African players in Europe, with former Bulls prop Pierre Schoeman a regular fixture and other familiar names including former Cheetahs props Boan Venter and Luan de Bruin, who join SA-born Scottish international WP Nel in Edinburgh’s front row ranks.

At the back, Duhan van der Merwe left them at the end of last season but the South Africans in their contingent include Henry Immelmann, Scottish international Jaco van der Walt and youngster Jordan Venter.

Local fans will also remember the name of British and Irish Lions flanker Hamish Watson, who plays for the club.

Where and when: Arms Park, Cardiff. Kick-off 8.35pm Saturday.

Cardiff will welcome the Bulls off the back of a winning home-record of four matches at the Arms Park as they look to re-establish themselves as one of the top contenders in the URC.

The club that once counted All Black great Jonah Lomu in its playing ranks, albeit when Lomu’s top days as a player were almost at an end, was the first stop for the Springboks on their 1994 tour, with the Boks winning 11-6.

The club boasts two British and Irish Lions players in Josh Navidi and Josh Adams – the latter being the top try scorer on the recent tour of South Africa. Adams will be playing this weekend for his club for the first time since 2019.

Cardiff are another club that have never lost at home to South African opposition, although they have tasted defeat on tour in South Africa, and will provide a tough challenge for the Bulls side.

Stormers will be ready for struggling Zebre, says Hlungwani
3 hours ago
3 hours ago

Stormers will be ready for struggling Zebre, says Hlungwani
3 hours ago
3 hours ago