‘I just want to play’ – Libbok hopes to grow with Stormers

Manie Libbok has joined an exciting Stormers backline that features a number of attacking players. 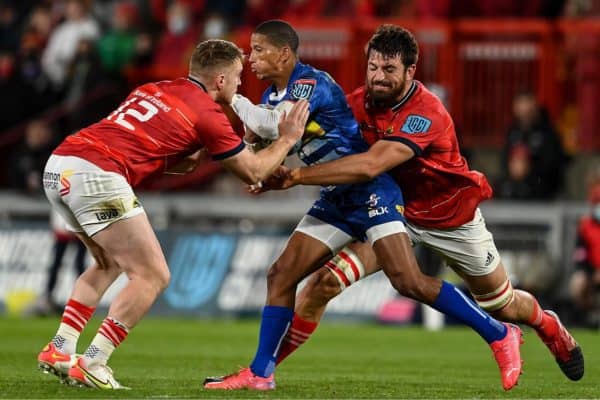 Stormers number 10 Manie Libbok is aiming to become a complete flyhalf and believes that the opportunity for some good game time in the United Rugby Championship will help him achieve that goal.

Twenty-four year old Libbock has become a bit of a journeyman in his fledgling career so far, having represented the Bulls, Sharks and now the Stormers in an effort to find regular game time.

He joined up with his current side just before the URC kicked off and started the first two games against Benetton and Munster, before picking up a slight niggle in the Munster game.

This then saw him going unused as a substitute against Edinburgh, but he is expected to be back in the saddle in Friday’s match against the Dragons in Newport.

ALSO READ: Stormers ready to ’empty the tank’ against Dragons

“My chat with Dobbo (coach John Dobson) was that I wanted game time. I just want to play, and I am just fortunate and lucky to get this opportunity to play for the Stormers,” Libbok said on his move to the Stormers.

“So my mindset now is to take the opportunity and put my best foot forward every time I put the jersey over my head.

“I believe I can be a complete flyhalf and not just known as a running or kicking flyhalf, so I really work hard in all of the departments to better my game going forward.

“I pride myself in working hard in all skill sets, if it is kicking, passing or running, I constantly work to get better in all three areas of my game.”

Libbok has joined an exciting Stormers backline that features a number of attacking players, suiting his playing style to a tee.

He also joins up with his good friend and former Bulls teammate Warrick Gelant, which has helped him settle into the Stormers system.

“I am really enjoying fitting in with the team. The guys have been welcoming, they have created a platform for me to come in and be myself and play my own game in the system,” Libbok said.

“The backline here is really exciting. It is very talented. I enjoy playing with the guys, we have gelled and connected quickly and feed off each other’s skill sets and energy on the field, which is good.

“The set-up here really suits me and the way I want to play, so I am just looking forward to what the future holds.”