The Stormers will have a couple of weeks off before preparing for their two-match home leg of the United Rugby Championship. 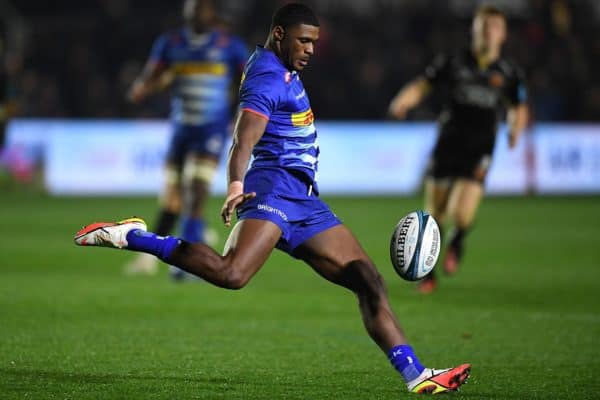 Warrick Gelant clears the ball for the Stormers in their match against Dragons at the weekend. Picture: Getty Images

It was a tough tour of growth for the Stormers in their first European foray in the United Rugby Championship that spanned Italy, Ireland, Scotland and Wales.

After opening losses against Benetton Treviso and Munster, they drew with Edinburgh and then finished off their tour on a high with a confidence boosting win against the Dragons over the weekend which will give them great momentum to take into their first home fixtures of the tournament.

“We were desperate for a win on the tour,” said Stormers coach John Dobson.

“It was a supreme physical effort. I think the Dragons are one of the most physical teams in the league with a great pack of forwards, so our belief built as we took their forwards’ legs.

“I am very proud of the effort. It is a very tricky place to play – it is very wet and the field is very slippery – so we probably lacked a bit of rhythm in some ways, but we will take it.

“There has been a lot of growth in this tour. Our maul defence is even better than it was in the Currie Cup, and our lineouts are at either 90% or 100%, so there are a lot of positives without our traditional big front row.”

The Stormers now head back to South Africa where they will have a couple of weeks off before preparing for the two-match home leg at the end of November and early December, which is a big relief for the team after they were set to play those games in Italy when SA was still on the UK travel red list.

“Going back to Italy would have been tough. Playing against Zebre, which is a home game for us, would have been played at their home, so I think giving the guys time off and getting to play in Cape Town means a lot to the team and we will be very energised,” Dobson said.

The Stormers will take on Zebre and Cardiff in their two games in Cape Town and they should be close to full strength with a number of players returning from injury and some of their Springboks set to be available.

“We will have some guys coming back from the national team and injury like Deon Fourie, Hacjivah (Dayimani) and Kade Wolhuter, so that has put us in a nice position,” said Dobson.

“We are putting together a pretty good squad going into the home games.”

Bulls will be ready for 'top-class' Munster, says Elrigh Louw
8 hours ago
8 hours ago

Bulls will be ready for 'top-class' Munster, says Elrigh Louw
8 hours ago
8 hours ago