‘Master the breakdown, be unstoppable’ in URC — Sharks’ Richardson

“It’s been difficult, it’s a new tournament and it’s a new experience for everyone." 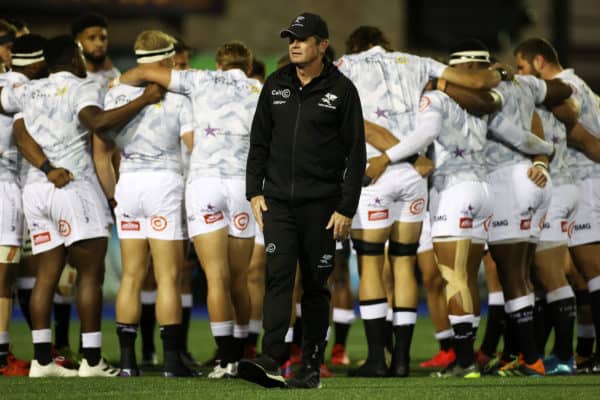 Sharks head coach Sean Everitt, with his team behind him during the recent four-match trip to Europe to play in the United Rugby Championship. Player Dylan Richardson says it is a matter of time before the South African fully find their feet. Picture: Chris Fairweather/Huw Evans Agency/Gallo Images

A tough month on the road came to an end last weekend with South African teams returning home after a mixed bag in their first four weeks in the United Rugby Championship.

And while it has been a bit of a baptism of fire, there have been a number of talking points that will need attention before they return to action in round six at home.

Dylan Richardson, who qualified for Scotland last weekend and will join up with the national team this week, believes the South African sides are finding their feet, but that it has been tough.

The Sharks recorded one win in four, mirroring the feats of the Lions and Bulls in the four week period. The Stormers had one draw and a win from their four outings.

Richardson reminded those who would listen that it is a new tournament, and it would take time for the South African sides to find their feet.

“It’s been difficult, it’s a new tournament and it’s a new experience for everyone. It’s more about the South African teams finding their feet a bit,” he said.

“The way the refs ref is different and that’s understandable and we have to abide by their rules. There are certain things that we need to do in terms of our game, to play at this level. There are certain other aspects that are required.

“But it is awesome for us, because as South Africans we are able to adapt as required to this type of game. As the tournament goes on, you will see the South African teams getting better and better with every game.

“It is just a bit of a learning process that shouldn’t take too long and a couple of months down the line the South African fans I’m sure will be proud of all the unions that have joined the URC.”

With the breakdown in particular a bone of contention, the South African sides will use this off-time to become more clinical and ensure they will be better when it comes to the interpretations when they face European opposition again.

Richardson said something the sides picked up was how hard the breakdown is targeted by URC teams, and how they need to adapt for it. But once they do, he has no qualms that the SA sides’ fortunes will change significantly.

“They are so clinical, which is awesome, because if we can get our game to that same level of breakdown, we will be unstoppable. They are very good at that, and it is something we picked up and noticed very early in the competition,” said the loose forward and sometimes hooker.

Other factors that the SA teams need to focus on include decision-making, patience and being more clinical in the red zone of the opposition.

But as they return home after a tough start to the competition, they will be more focused, know what awaits them and now look forward to the luxury of playing at their home grounds.

And after a month away from home, that in itself could be a perfect boost for the teams.